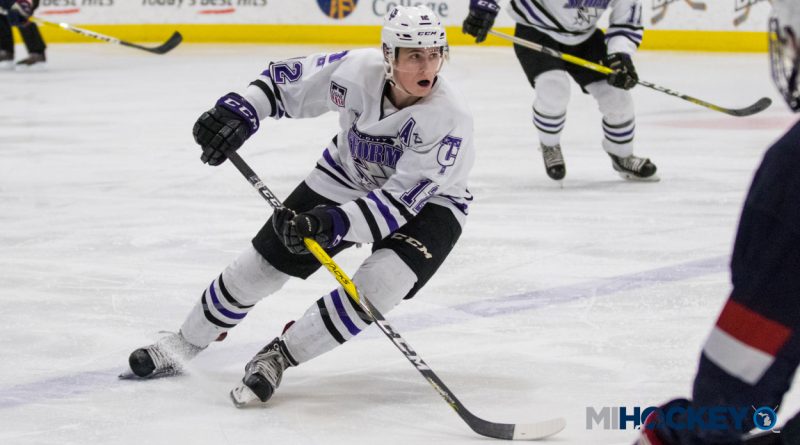 One day after landing the Krygier twins, the Michigan State Spartans have pulled in another Michigan native.

Adam Goodsir, an Okemos native, has committed to his hometown school.

Previously a Denver commit, Goodsir announced on Twitter Thursday night that he is joining the Spartans – complete with a photo of himself as a youngster at MSU’s summer hockey school.

“After moving away from home three years ago to play junior hockey, it is amazing to be coming home to play at MSU as a hometown player with friends and family nearby,” Goodsir told MiHockey.

So honored to announce my commitment to play college hockey at Michigan State University, my hometown favorite & childhood dream. pic.twitter.com/djSGDyTOA7

A captain of the Tri-City Storm this season, Goodsir posted 20 points in 59 games.

He’s a Lansing Capitals and Oakland Jr. Grizzlies alum. In 2015-16, he made the jump to the NAHL, playing with the Wichita Falls Wildcats and logging 45 points in 59 games.

He’s spent the last two years with the Storm of the USHL. Now, he’ll have a chance to skate under new coach Danton Cole and the Spartans’ coaching staff.

“I am particularly excited to have the opportunity to be coached and developed by the new coaching staff,” Goodsir said. “Coach Cole has a proven track record of preparing players to be an impact in college as well developing them for the next level. The change of culture and direction the program is moving in is something I feel confident I can contribute to and look forward to being a big part of.

“As a child, I always dreamed of wearing a green sweater. Now I have the chance to live my dream of Big Ten Hockey at MSU, coupled with a great education and hopefully a few National Championships.”