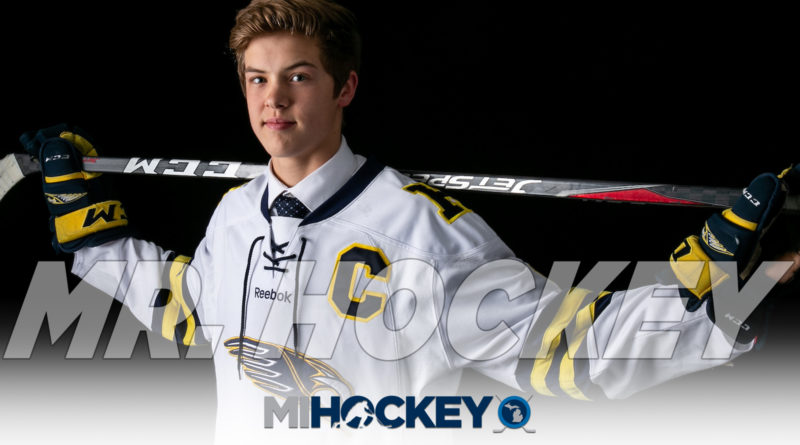 FARMINGTON HILLS – Joey Larson will have to make some more room in the trophy case.

After winning a second-straight state title with Hartland High School, the Eagles’ captain has now captured the most prestigious individual award for high school hockey in Michigan.

Larson is the winner of the 2019 Mr. Hockey award.

“It was crazy,” he said moments after accepting the prestigious trophy. “I didn’t think I was going to win it, but I knew I had a good chance. I was so happy.”

The senior forward led the Kensington Lakes Activities Association in scoring in 2018-19, recording 25 goals and 20 assists for 45 total points.

Yet winning Mr. Hockey didn’t top the feeling he got at USA Hockey Arena when Hartland officially won its second-straight state championship – this time with Larson wearing the captain’s ‘C’ on his chest.

“Definitely leading Hartland to a state title,” Larson said when asked which moment was better. “There’s no better feeling than winning a state championship – I’m glad we were able to do that. This is just a nice way to top it off.”

He said Hartland head coach Rick Gadwa is an “unreal guy.” The Eagles’ bench boss had similar sentiments about his captain.

“There isn’t a better character individual than Joey,” coach Rick Gadwa said. “We’re so incredibly proud of him. His skill set is second to none, but he’s an even better person off the ice.