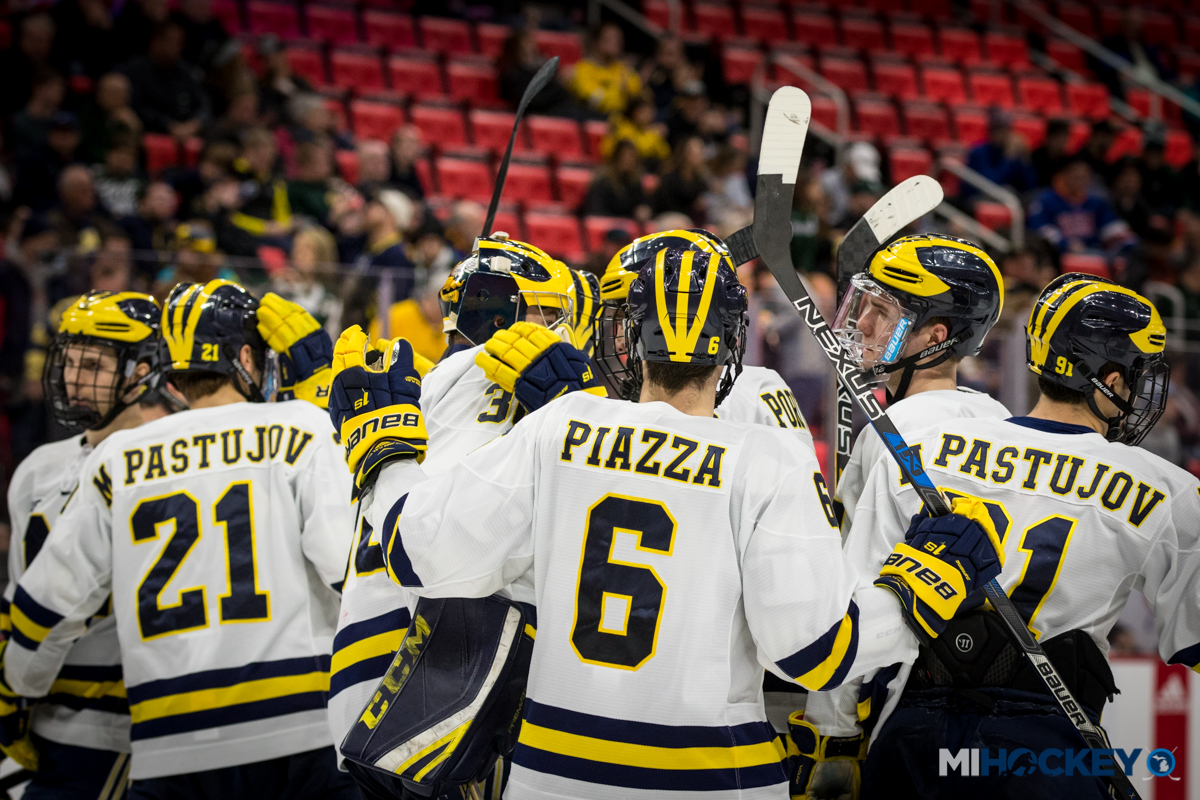 DETROIT – Prior to their Great Lakes Invitational win over rival Michigan State, the Wolverines received a visit from an alumnus who now calls Little Caesars Arena his home.

Luke Glendening gave an inspirational talk, which the players say helped fuel their efforts out on the ice.

“I thought he gave a real good talk, from the heart, not just something made up, and I thought that was really good,” head coach Mel Pearson said. “And I thought we had time to reflect on that, the discussion he had with our team before the game. Not that that was the miracle pill or something like that, but I think it was important.”

Defenseman Cutler Martin missed the first half of the season due to injury, but recorded a goal and an assist in the two-day tournament.

“He really just told us after yesterday’s loss also to take a look in the mirror,” Martin said of Glendening’s message. “Yesterday, it’s easy to point fingers maybe, but everyone needs to do their own job and make sure they do it to the best of their ability, so look at yourself and what you can do better.”

“He just talked about how when he came here, he was walk-on and was never really promised anything,” forward Cooper Marody said. “The coaches told him he may never get to play here. Just with hard work, determination and the passion for Michigan, he was able to be a captain for two years and obviously all of us know he’s had a great career in the NHL thus far. He just passionately spoke about Michigan and what it means to be a Michigan man every day.”

Marody’s apparently embracing what it means to be a Michigan man. The Brighton native potted a hat trick in the 6-4 win against MSU and was named to the All-Tournament Team. With 28 points in 18 games now, Marody currently sits tied for first in NCAA scoring with Notre Dame’s Jake Evans and Western Michigan’s Wade Allison.

“It felt good to see the puck go in the net, but felt even better beating Michigan State,” Marody said. “We’ve got a great opportunity with Notre Dame coming on, so we’re very excited about that.”

The 8-8-1 Wolverines are hoping that GLi win over the Spartans can serve as a springboard into a fresh second half. Especially with the No. 2 Fighting Irish looming for a home-and-home series set for Friday and Sunday. Friday night also marks the return of Red Berenson for his official rink dedication at Yost Ice Arena.

“It’s a weird week,” Pearson said. “You’d like to have a normal week to practice and prepare, especially for a team like Notre Dame, but maybe that’s OK, maybe it’s OK we played some games and we had to battle and did some things.

It doesn’t get much easier the next weekend, either, as Michigan will head to Minnesota to take on U.S. World Junior Championship standout Casey Mittelstadt and the No. 10 Golden Gophers. And then it’s a home series against No. 14 Penn State on Jan. 19-20 before a visit to No. 8 Ohio State the following weekend.