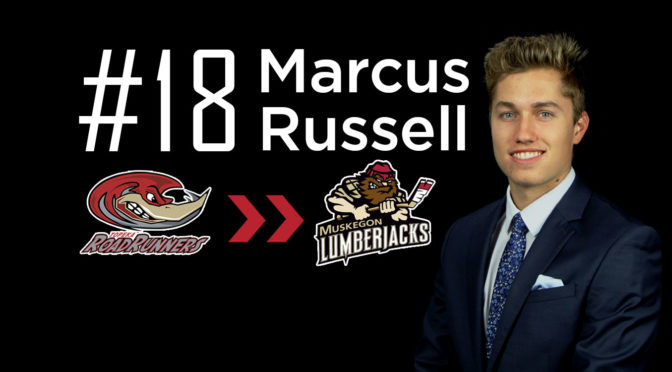 Marcus Russell was recently summoned to the Muskegon Lumberjacks.

That wasn’t the only big change in his hockey resume, however.

The Traverse City native announced his commitment to Michigan Tech on New Year’s Eve, securing a spot with the Huskies at the conclusion of his junior hockey career.

“I chose Michigan Tech because it’s a great school that has a really successful hockey program,” Russell told MiHockey. “Head coach Mel Pearson was really knowledgeable, and personable, which drew me as well.”

Russell had 25 points in 28 games with the Topeka RoadRunners of the NAHL before the call-up to the USHL franchise in his home state. He has skated in four games with the Lumberjacks so far.

The future Huskies forward played for Traverse City Central High School before spending two seasons with Honeybaked. In 2014-15, he split time between the Salmon Arm Silverbacks and the Alberni Valley Bulldogs of the BCHL, before spending a full season with Topeka in the NAHL last year.

Russell, whose brother Jon is a Harvard commit, told MiHockey that he’s excited to play college hockey to be able to stay a little closer to home than he was for juniors.