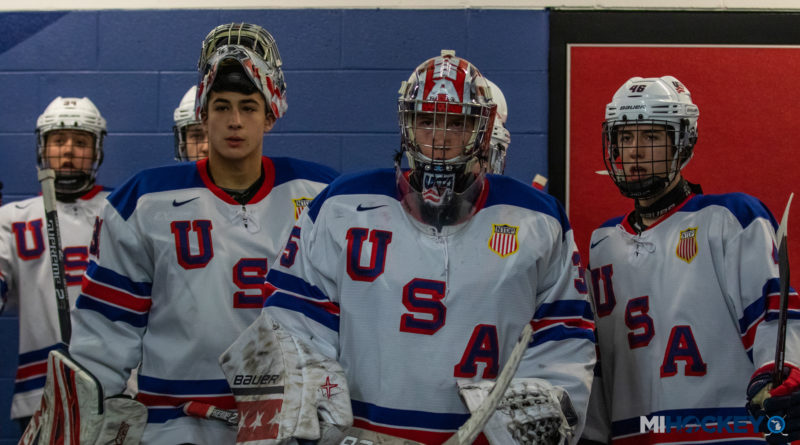 The new USA Hockey National Team Development Program Under-18 Team is starting their home schedule with a bang, that’s for sure.

Their first experience with playing NCAA Division 1 teams coincides with the team’s opening weekend, as they kick off a new season of games at USA Hockey Arena with games against Northern Michigan and Notre Dame this Saturday and Sunday.

The Under-18 Team – last year’s Under-17 Team – kept their schedule light in September in an effort to prepare for a lengthy season which features NCAA competition, USHL competition, international tournaments and the IIHF Under-18 World Championship in Plymouth and Ann Arbor conclusion.

“Yeah, we’re very excited about [the opening weekend],” said head coach Seth Appert. “We didn’t have a lot of games in September intentionally. We wanted to take the extra time to be in the weight room and continue our summer training. We know how hard the USHL is, we know how hard the NCAA games are going to be and then also the rest of the world in April, and we wanted to take the extra five weeks in the weight room. We’ve only had three games under our belt, they’ve all been on the road, so we’re excited to be home.”

Team USA didn’t show much rust in those three games. After an 11-8 win over the Muskegon Lumberjacks in a preseason tune-up, they started the 2019-2020 USHL season with a pair of wins at the league’s Fall Classic in Pittsburgh – 5-2 against Green Bay and 4-0 against Sioux City.

Last season, the major adjustment for the 2002 birth-year group, at the Under-17 Team level, was competing in the USHL. This season, it’s the college schedule, as the high school seniors will compete against D1 college hockey teams both at home and on the road.

When asked if he thought his team was ready for this year’s challenge – and the substantial ones that come this weekend with Northern Michigan and Notre Dame – Appert said they’re not supposed to be.

“You’re never ready. You’re just not. Just like in the 17 year, you’re not really ready for the USHL. You just have to throw them into the deep end and start figuring it out. The college games are going to be just like that, two great programs coming in this weekend in Northern Michigan and Notre Dame – our fans are in for a real treat this year. You’ve got Northern Michigan, Notre Dame, Lake State – storied programs from around this area. Then you’ve got BU and North Dakota and Wisconsin as home games this year – pretty special. We’ll certainly be in over our heads early, and then we’ll have to adjust and adapt.”

For Fort Gratiot native Jacob Truscott – one of two Michigan natives on the U18 roster – said the message from the coaching staff heading into the opening weekend is to stick to what they’ve always done and they will adjust accordingly.

Ty Smilanic, a former Belle Tire and Little Caesars forward, will be making his season debut this weekend after missing the first three with an injury. He said he and his teammates can’t wait for the college competition.

“Really excited, especially for me as it’s going to be my first game of the year. To play a college team, it’s going to be awesome. Hopefully there are a quite a few people out watching and we get the win.

“…everything’s awesome. You can tell how much better we are this year, and how we’re winning USHL games, it’s pretty cool to see and obviously we’re pretty excited for this upcoming weekend.”

Puck drops on the 2019-2020 home schedule for the NTDP at 7 p.m. on Saturday against the Northern Michigan Wildcats; on Sunday, the NTDP takes on Notre Dame at 4 p.m. Click here for ticket info.

Sunday will be a special day for the Slaggert family, as the NTDP Under-18 Team forward Landon Slaggert will take on his brother, Graham, a NTDP alum and sophomore forward at Notre Dame, and his dad, Andy, an assistant coach with the Fighting Irish.

Who will Tara Slaggert, the matriarch of the Slaggert household, cheer for during the game?

“I don’t know who she is going to cheer for,” Landon said, via the NTDP’s official site. “My dad and brother are with Notre Dame, but I might be the one she cheers for. My brother always says that I’m the favorite since I’m the middle child. I have a feeling that she will stay neutral when she is sitting with our family.”

This will be a one-time ordeal for the Chicago-area family; next year, Landon will be joining Graham on the ND roster.

“It is all about bragging rights,” Landon said. “Who knows who will be bragging until after the game?

The NTDP Under-18 Team has one new player on the roster this season, but he’s a familiar face around USA Hockey Arena.

Team USA officially added Zak Karpa to the roster, after the HoneyBaked 16U forward practiced with and played in 12 games with the team last season.

The son of former NHLer Dave Karpa, Zak is a Princeton commit.

“Zak Karpa, he isn’t that new,” Appert said. “He played a chunk of games with us last year and he practiced with us pretty much every day after Christmas. He wanted to practice. He didn’t ask for anything else, just if he could come practice with us. He really impressed us. Not only is he talented and intelligent, a big body, but when you’re around kids every day, you get to see what their make-up is, what their identity is, what is their DNA as a hockey player. Are they guys who are just about flash and skill, or do they show up every day and work? Those guys just keep getting better throughout their career. He’s that. I think if we would have watched him play midget hockey all year and not known him, he would have been a guy in consideration, but who knows. When you’re around him every day, you see what he’s made of as a human being, how he comes to the rink every day, and he’s a kid you think you can win with.”