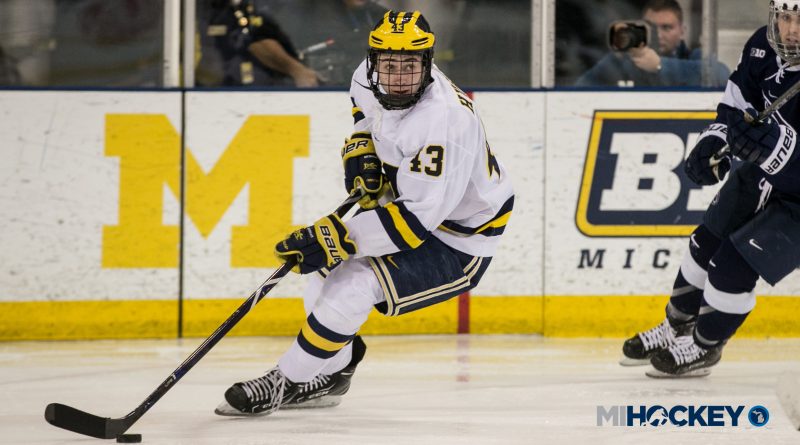 It was a good day for the Hughes family.

Just hours after Luke won a state championship with the Little Caesars 15-Only team, his brother signed an NHL contract.

Quinn Hughes is officially a member of the Vancouver Canucks.

The University of Michigan sophomore defenseman and Hobey Baker candidate has signed a three-year, entry-level contract with the team that drafted him No. 7 overall last summer.

“Thank you to the coaching staff, medical staff, trainers and the best fans in college hockey,” Hughes said via the Wolverines. “Most importantly, thank you to my teammates who made this the best two years of my life. Proud to be apart of the Michigan family! Go Blue!”

The 19-year-old’s sophomore season with the Wolverines came to a close on Saturday, as Michigan fell to Minnesota in the first round of the Big Ten Tournament.

“Quinn is an exceptional skater, strong on the puck and plays with creativity and vision,” said Canucks general manager Jim Benning in a press release. “He was a leader on his team at the University of Michigan and has had success at the international level. We’re excited for Quinn to join our team and continue to grow his game as a member of the Vancouver Canucks.”

He led Michigan with 33 points in 32 games this season, after posting 29 as a rookie in 37 games.

“I want to congratulate Quinn on his signing with the Vancouver Canucks,” said Michigan coach Mel Pearson in the team’s announcement. “I want to thank him for his time at the University of Michigan and the contributions that he made to our program. Quinn is an outstanding player, but more importantly he is an outstanding young man. The Canucks are getting an elite prospect and we look forward to following Quinn’s professional career.”

From the start of this season, where Hughes talked about his brothers – Luke, as mentioned above, and Jack, the expected No. 1 overall pick in the upcoming NHL Draft currently starring for the NTDP.

The Canucks’ release says he will be traveling to Vancouver on Tuesday.