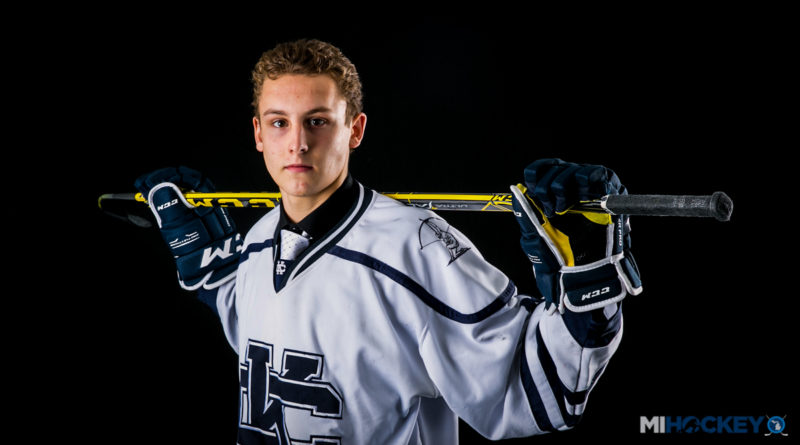 The Regula family will be adding more red to their clothing collection soon.

CJ Regula has announced his commitment to the Ohio State Buckeyes.

“Well when I went on my visit I was blown away,” Regula told MiHockey. “Its an unbelievable program surrounded by an amazing coaching staff. That, along with everything Ohio State has to offer, is why I chose to play there.

“I’m more than proud to be going to Ohio State and I’m super excited for what the future holds.”

Regula, the brother of Red Wings draftee Alec Regula, is settling in with the Shreveport Mudbugs of the NAHL after spending the earlier portions of the 2018-19 campaign with the Minnesota Wilderness.

The change of scenery seems to have served him well so far. Regula, a defenseman, was named the South Division player of the week on Jan. 28 after he posted seven points in three games (one goal and six assists) and a +6 rating in the timeframe.

“We feel CJ is really coming along well since joining the Mudbugs,” head coach Jason Campbell said in the weekly stars press release. “He’s been feeling more comfortable and confident on the ice and his performance this past week has been a reflection of that. He’s been poised with puck, making heads up simple plays and moving his feet well.  This little taste of success is attributed not only to his consistent play, but also that of his teammates.”

The Regula brothers won a state championship together with Cranbrook-Kingswood in 2014-15. In 2015-16, CJ wore the ‘C’ for Andy Weidenbach’s club, then he began his career in juniors.

In 2017-18, He played for the Corpus Christi IceRays and then the Minnesota Wilderness, totaling 21 points.

He has been in the process of switching from forward to defenseman, and it has been working well in Shreveport; Regula has 16 points in 16 games with the Mudbugs.

Now, he’s secured a spot with a Big Ten program as a blueliner. The school CJ selected – Ohio State – is notable, as well, as Alec was once a verbal commit to Michigan. In an Instagram post congratulating his brother, the London Knights defenseman said, “Guess I’m a Buckeye fan now ;)”.