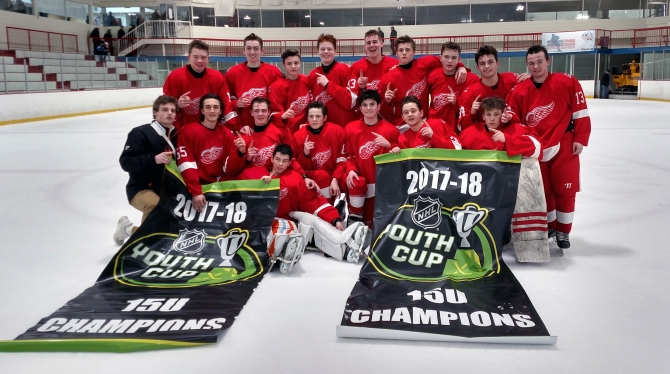 While Mike Green was representing the Detroit Red Wings at the 2018 NHL All-Star Game in Tampa Bay, Little Caesars squads were carrying the Hockeytown torch in New England.

At the first NHL Youth Cup midget tournament, the Little Caesars 15U, 16U and 18U teams skated with the Winged Wheel logo on their chests, and two of the three came home with titles.

Both the 15U and 16U teams posted undefeated records en route to NHL Youth Cup titles.

The 15U team – coached by Kris Draper – topped the Chicago (Blackhawks) Mission 2-0 in the final game. Leading up to the championship, they had out-scored their opposition 27-4 in four games.

The 16U team won in more dramatic fashion, as they beat the Colorado (Avalanche) Thunderbirds 3-2 in overtime in the final contest. It was the second time the Jr. Wings vs. Jr. Avs rivalry needed OT; Caesars opened tournament play with another 3-2 overtime win. Between the two matchups with the Thunderbirds, the LC team beat Dallas 4-0, Pittsburgh 6-1 and Carolina 7-1.

The 18U team finished with a 2-2 record; they beat L.A. and Ohio but fell to the Thunderbirds and the Jr. Islanders.

.@mtuhky recruit Evan Orr celebrates after his game-winning overtime goal to capture the U16 crown for @LCAAAHockey pic.twitter.com/xq9jpa877U