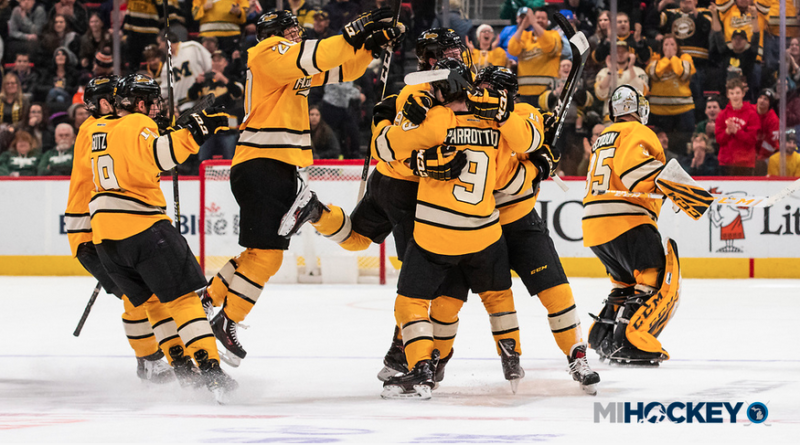 Michigan Tech picked a good time to record its first home win of the 2019-2020 season.

On Friday night, the Huskies rallied for a third-period 3-2 comeback win over rival and No. 19 ranked Northern Michigan in Houghton in the first of two match-ups between the two storied Upper Peninsula rivals.

Brian Halonen scored the game-winning goal with a one-timer blast on a power play at the 9:14 mark of the third period, while Matt Jurusik made 24 saves between the pipes to get the win for MTU.

“Hats off to our guys for getting the first home win of the season,” Tech coach Joe Shawhan said via the Huskies. “Our team worked extremely hard and overcame a lot. Northern is a good hockey team and well-coached.

“Our goaltending and penalty kill were really good again and the home crowd was absolutely awesome for us and provided a ton of energy.”

Parker Saretsky and Colin Swoyer scored the other goals for Tech – Swoyer’s strike came just 1:10 before Halonen’s game-winner in the third to erase a 2-1 NMU lead.

Northern received goals from Griffin Loughran and Joseph Nardi; Loughran now leads the NCAA with 10 goals on the season.

Nolan Kent was between the pipes for Northern, making 23 saves in the loss.

The series now shifts to the Berry Events Center in Marquette for the rematch tonight; puck drops at 6:07 p.m.