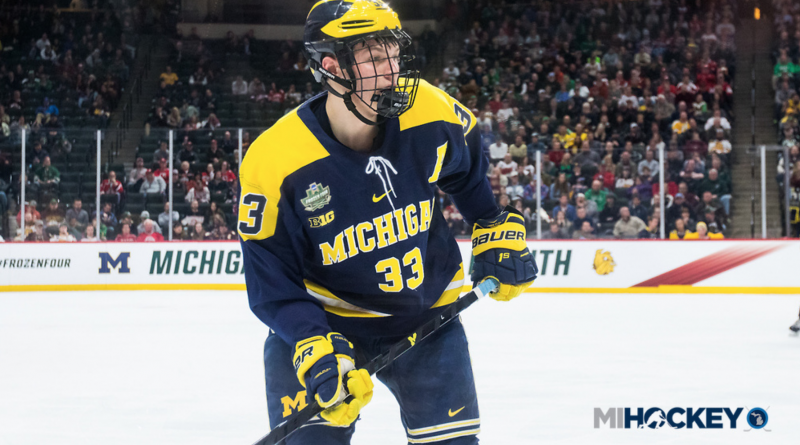 Photo by Michael Caples/MiHockey
College For Fans The Latest University of Michigan Wolverines
May 21, 2018 MiHockey Staff

The University of Michigan named its next leadership core on Monday.

Senior defenseman Joseph Cecconi will serve as the Wolverines’ captain for the 2018-19 campaign, the 99th captain in team history. A native of Youngstown, New York, Cecconi set career-high marks during the 2017-18 campaign in goals (five), assists (22) and points (27).

Fellow senior blue liner Nick Boka will serve as one of the alternate captains, along with juniors Luke Martin, Will Lockwood and Jake Slaker.

Boka, a Plymouth native and alumnus of USA Hockey’s National Team Development Program, recorded seven points and a team second-best plus-16 rating in 39 games for the Wolverines last season. Boka is a prospect of the Minnesota Wild (sixth round, 2015).

Lockwood, a Bloomfield Hills native and NTDP alum, recorded 11 points in 16 games before he suffered a season-ending injury in January playing for Team USA in the World Junior Championship. Lockwood was a third-round pick of the Vancouver Canucks in 2016.

Martin played in all 40 of Michigan’s games this past season and chipped in with eight points from the back end, while his plus-16 rating tied Boka for second on the Wolverines. The 6-foot-2 blueliner was a second-round pick of the Carolina Hurricanes in 2017.

Slaker will serve as an alternate captain for the second year in a row after setting career highs in goals (15) and points (27).