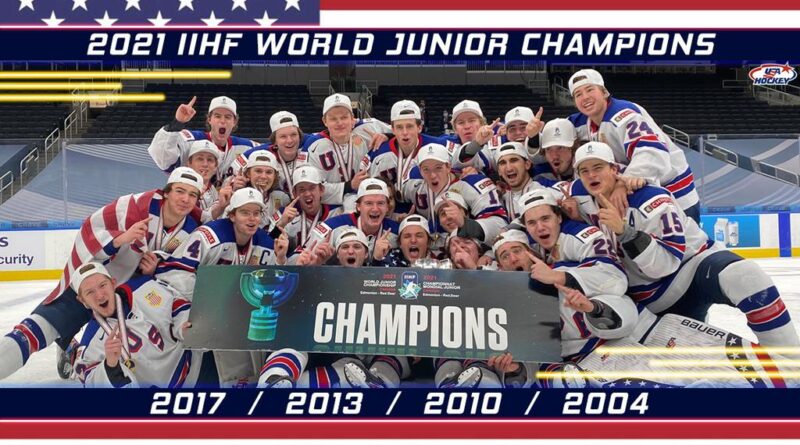 They were going up against a team with 20 first-round NHL picks.

A team coming off a dominant 5-0 win over Russia in the semifinals and one that hadn’t trailed in a game for the entire tournament.

But HoneyBaked alum Alex Turcotte, Spencer Knight, Trevor Zegras and Team USA had other plans to kick off 2021.

A first-period redirection goal by Turcotte quickly put an end to that Canadian streak, and it also stood up to be the game winner as Team USA claimed the gold medal in a 2-0 shutout win over Team Canada in the early Wednesday hours. Zegras scored the U.S. insurance goal for his, and Knight stopped all 34 shots he faced between the pipes.

The victory marked the Americans’ first gold medal since 2017, also a win over Canada, and their fifth in the tournament overall. The last four times the U.S. and Canada have met in the gold-medal game, the Americans have come out on top.

Zegras was named tournament MVP for his efforts, after compiling seven goals and 11 assists to lead in scoring. His 20 assists and 27 points tied Jordan Schroeder’s totals as the most by a Team USA player in his World Juniors career. Zegras amassed the totals in just two tournaments and 12 games, while Schroeder did so in three tournaments and 19 games.

Wyandotte native and Muskegon Lumberjacks alum Hunter Skinner also took home a gold medal and skated in one game for Team USA along the way.