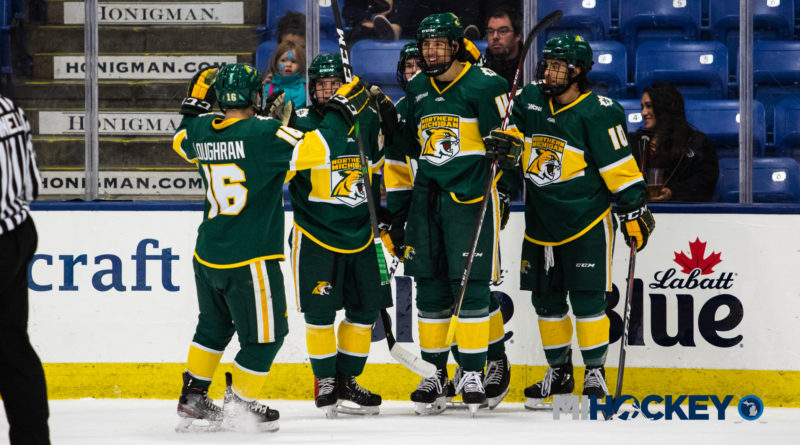 Minnesota State has only lost two games all season.

One of those came at the Berry Events Center.

The Northern Michigan Wildcats gave the then-No. 1 team in the country a rare WCHA loss Saturday night, as the home team prevailed 4-1 in Marquette.

It was the first time since 2011 that the Wildcats took down the No. 1 ranked team in the NCAA.

Minnesota State’s only other loss on the season came to a ranked Bowling Green squad in overtime. Last year, the Mavericks were 20-5-1 in conference play, as well.

From the Mining Journal:

“It took everybody,” Wildcats head coach Grant Potulny said. “We talked before the game; we can’t have any passengers. If you think back throughout the game, moments that really stick out is early in the game, we had a little breakdown and their ‘D’ had a chance to walk right down Broadway and Vinny (de Mey) just took a missile.

“That’s the difference between that getting on the net and causing havoc, or building your bench up. He sacrificed his body.

“To the second period, we give up a breakaway after a disjointed five-minute major (penalty). Usually those things end up going in your net when you’re playing like that and (goalie) Nolan (Kent) stands tall.

“To the end of the second period, they really had it going on us and the (Luke) Voltin line was out there and they were tired. (Defensemen Rylan) Yaremko and (Tanner) Vescio had been out there for a little bit and they’re tired. It’s that second little bit to get (the puck) over the blue line and change (lines).

“To the third period to hold the No. 1 team in the country to four shots on net. I don’t know if they’ve ever had a period where they’ve only had four shots.

“So it was everybody. I don’t think there’s anybody that I’ll look back in this game and say they didn’t have their best game.”

Here are the highlights from the contest, where you can see Michael Van Unen, Ben Newhouse, Andre Ghantous and Griffin Loughran score for the Wildcats and Nolan Kent make some of his 31 saves.