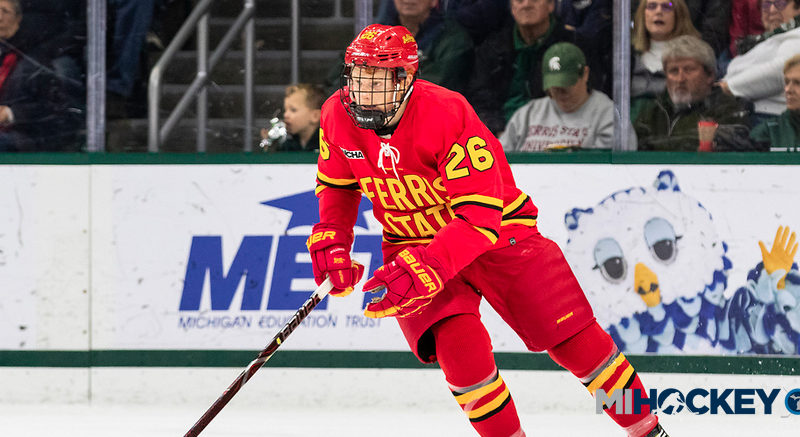 Ferris State got an early start to the 2019-2020 season, playing a Thursday home game against Colgate to kick off their NCAA campaign.

The Thursday night game didn’t bother the Bulldogs, as they posted a 3-1 victory over the Raiders at the Ewigleben Ice Arena.

Senior defenseman Joe Rutkowski scored the game-winner in the third period, forcing a turnover just outside the Colgate blue line and firing a wrist shot past goaltender Mitch Benson.

In the first period, Lucas Finner scored a power-play goal on a quick shot from just inside the blue line that made it through a crowd and past Benson. That goal evened the game after an early strike from Colgate.

Coale Norris wrapped things up with an empty-netter at the 19:56 mark of the third period.

Sophomore netminder Roni Salmenkangas stopped 28 of the 29 shots sent his way to record the victory in the season opener.

Ferris State is off to a strong start in the 2019-2020 season, after beating the USA Hockey National Team Development Program Under-18 Team 5-0 earlier this week. Last Sunday, they tied Waterloo 2-2.