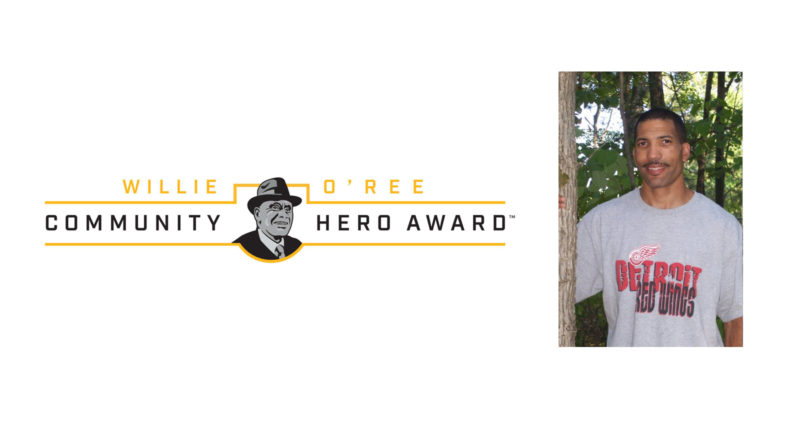 Flint native Rico Phillips is bringing a trophy back home to Michigan.

The founder of the Flint Inner City Youth Hockey program was named the 2019 recipient of the Willie O’Ree Community Hero Award tonight during the NHL Awards Show in Las Vegas (and live on NBC Sports Network).

The Willie O’Ree Community Hero Award “recognizes an individual, who like Willie O’Ree, has worked to make a positive impact on his or her community, culture or society to make people better through hockey.”

It was first introduced in 2018; the late Darcy Haugan of the Humboldt Broncos was the inaugural recipient.

Phillips, a firefighter, built a nine-week program in his hometown that gives kids the opportunity to play hockey for free.

Here is the full write-up from the NHL about Phillips’ efforts to help grow the game in Flint:

“Rico Phillips grew up in the city of Flint, Michigan and has always desired to make his community a better place. Rico’s impact on the community has been made through his two passions in life, firefighting and hockey. Rico’s greatest community impact was founding the Flint Inner City Youth Hockey program and serving as the program director. For the past six years, this program has provided the children of Flint, MI, the opportunity to play hockey for free. Throughout the nine-week program, high school hockey teams and parents provide mentorship and assistance on and off the ice. This grass roots effort supports local businesses and gathers hundreds of volunteers. Through this program, Rico has been able to promote cultural diversity within our community while adhering to a strong set of values. The program builds character by promoting commitment, hard work, belief and openness. The impact is felt by the participants, their families and our volunteers. Rico is an inspirational leader, coach, hockey official and career day speaker who spreads a positive message to our youth and community.”

Phillips was one of two Michigan hockey leaders up for the award; Clark Park hockey program creator Anthony Benavides was also at the NHL Awards Show as a fellow finalist.

Here was the NHL write-up on Benavides:

In 1993, Anthony created the Clark Park Hockey Program in southwest Detroit, an affordable youth hockey program serving youth in a predominantly Latino community battling gang activity, crime, and poverty. Anthony has created a welcoming program in an urban, impoverished neighborhood where hockey is a non-traditional sport, to promote skills development and help youth grow into responsible, self-confident adults. Anthony has built strong relationships within the community to obtain funding for the hockey program, receive help on repairs and to provide free equipment for the youth who participate in the program. Clark Park regularly hosts drop-in hockey for youth, alumni and friends as well as tournaments and outdoor hockey games. Under Anthony’s leadership, Clark Park’s program grew from approximately 80 youth players to 140 in a matter of a year. Over the years, this program has served hundreds of youth with diverse backgrounds, who now play on suburban USA Hockey, high school and junior teams, as well as adult leagues. Anthony’s legacy blossoms from the love of hockey and building a better community.