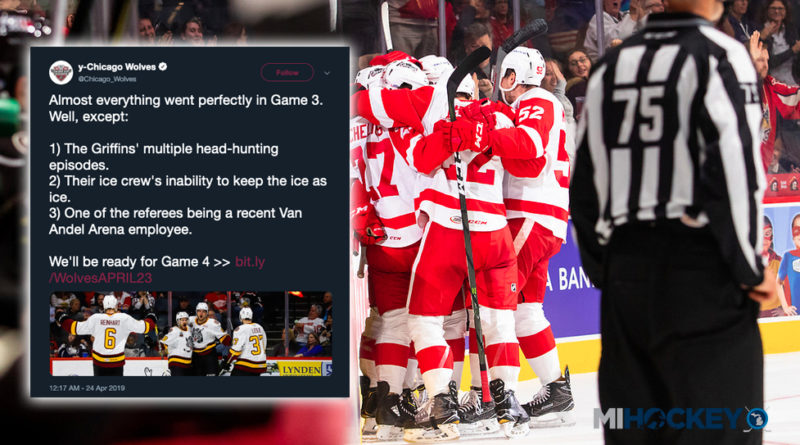 The Grand Rapids Griffins moved within one game of advancing to the second round of the AHL Playoffs with a victory Tuesday night.

Tempers flared along the way, however.

The Griffins claimed Game 3 of their first-round series with the Chicago Wolves Tuesday night in a 6-2 victory that featured eight unsportsmanlike conduct penalties, four fighting majors and plenty of other fireworks.

It all started with Dylan McIlrath receiving a match penalty for a hit to the head in the first period.

And the McIlrath hit in particular:

Chicago head coach Rocky Thompson said this in the team’s release after the game:

“I thought we were playing really well and we were controlling the game,” said Wolves head coach Rocky Thompson. “They were taking really dangerous hits on our players – and they got called for the first one. Then it was just one thing after another. It doesn’t add up to me.

“From the game’s perspective, our guys played hard and they played good. Obviously you get frustrated (when teammates keep getting hurt).”

Comments from the Griffins:

Almost everything went perfectly in Game 3. Well, except:

1) The Griffins’ multiple head-hunting episodes.
2) Their ice crew’s inability to keep the ice as ice.
3) One of the referees being a recent Van Andel Arena employee.

One of the referees in the contest was Jake Rekucki, a West Michigan native.

The two teams don’t have much time to calm down before Game 4, as that takes place tonight back at Van Andel Arena. MiHockey will be there for coverage.