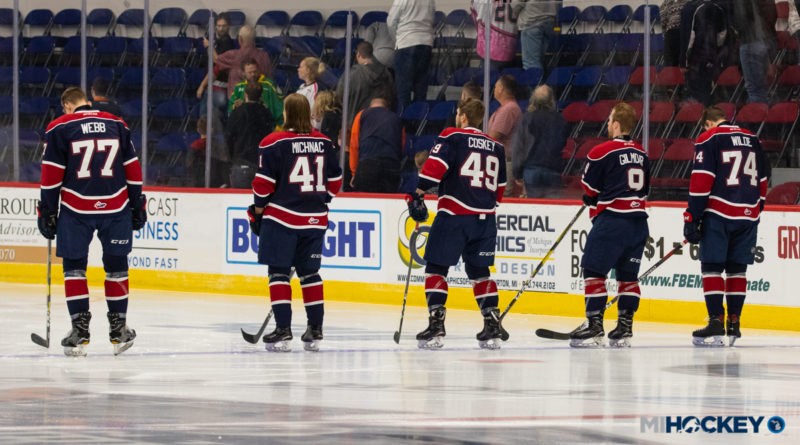 For the first time ever, the Saginaw Spirit will play for the Wayne Gretzky Trophy.

Saginaw will play host to the Guelph Storm Thursday night in the opening game of the 2019 OHL Western Conference Championship Series after knocking out the Sarnia Sting and defending Western Conference champion Soo Greyhounds. While the run has brought the franchise to uncharted territory already, the Spirit feel the end-goal is still on the horizon.

“It is an exciting time,” Spirit coach Chris Lazary said. “We’re just a proud franchise right now. Ownership is pretty excited, our management group is excited, I know the coaching staff and the players are thrilled to have this opportunity. We recognize what a special moment it is and how fortunate we are to be here, but we feel like we’re not done yet. We’re not satisfied, but we do recognize the opportunity in front of us and how special this is, not only for our fans, but our whole organization.”

Saginaw captain Damien Giroux said with all the buzz around the team in mid-Michigan, the team is ready to get the series started.

“I think all of our players are pretty excited,” Giroux said. “I know for some of these players here, it’s the first time winning a playoff game, so it’s a really thrilling moment, and we’re excited to keep it going here in the third round.

“I think the fans, the community is real excited and it’s awesome to see them having our backs here, so we’re really excited here to start the series tomorrow.”

Owen Tippett is the Spirit’s leading scorer, with nine goals and 17 points through ten games. Tippett, along with fellow forward Ryan McLeod (4-6–10), were trade deadline acquisitions, as Saginaw loaded up for a playoff run.

“I think one thing we did recognize we lacked with our group was some playoff experience,” Lazary said. “Dave Drinkill did a phenomenal job identifying Owen Tippett and Ryan McLeod as two players we’d certainly like to target to add to our group to try and make a push here. Just the presence in the room, the calmness. There’s been some crazy moments just like in every series where you need leadership to get you through, and I think Owen Tippett and Ryan McLeod, you think of Justin Murray and Reagan O’Grady–these guys have been through it before, they’re very calm and they keep the group together, lead by example.”

The Storm, meanwhile, enter the series having pulled off an incredulous comeback against the London Knights, initially down 3-0 in the series and also down 3-1 in Game 7. Guelph became just the fifth team in OHL history to come back from a 3-0 deficit.

“It has been an emotional time here, lots of ups and downs and a tough start to our most recent series with London, but the emotions of winning Game 5 and 7 last night, coming back from being behind, thrilling for our players, and we looked to our leadership, led by Isaac (Ratcliffe), but a number of guys have playoff experience the have allowed to keep our group calm and find our way back into the series. It didn’t look very good after the first two or three games.”

Ratcliffe, the Guelph captain, and fellow forward Nick Suzuki have powered the Storm offense this postseason, as the duo has combined for 15 goals and 33 points in 11 games.

“It’s been a whirlwind of emotions. I think even after the game, some of the guys were still in shock. We were able to pull that off and come out of that series. I think we’ve got a quick turnaround here, so the rest is going to be the most important thing from now until 7 o’clock tomorrow.

“There’s not really too much time to celebrate, as we get back into it here. Just really excited to get down to Saginaw and get the series started.”