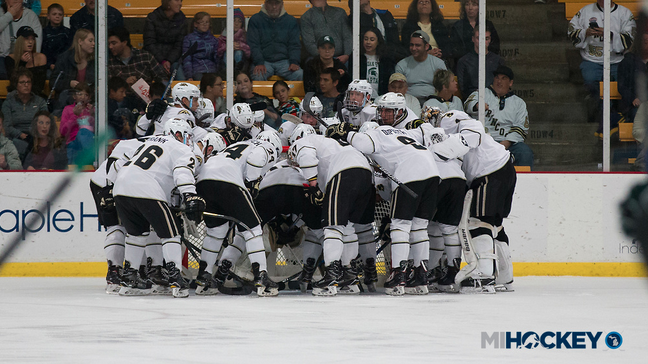 The Broncos and the Bulldogs met in a rivalry weekend home-and-home between the two West-Michigan programs, and Western Michigan claimed all the bragging rights.

After a 4-3 victory Friday night in Big Rapids, the Broncos followed up with a 5-0 shutout in Kalamazoo on Saturday to record a pair of non-conference wins over their neighbors.

Highlights from Saturday’s win, which was the first collegiate shutout for senior goaltender Trevor Gorsuch:

On Friday,the Broncos had stormed out to a 4-0 first period lead before having to hold on in the late stages of the contest. Dawson DiPietro, Jade McMullen, Hugh McGing and Cam Lee all scored in the first 11:23 of the contest for WMU – the four goals needed to withstand a rally over the next 40 minutes-plus by the Bulldogs.

Coale Norris scored his first of the night with 15 seconds remaining in the first period to end a rough opening frame on a high note for the Bulldogs. After a scoreless middle period, Frankie Melton scored 5:04 into the third, and Norris struck again at the 12:56 mark. It wasn’t enough, however, as Austin Cain stopped enough shots in the end to get the win for the Broncos.

Saturday, with the series shifting to Lawson, the Broncos only scored one in the first, but then kept building on the lead from there. Cole Gallant scored late in the first, and in the second, Colt Conrad and Lee added to the WMU lead.

In the third, Josh Passolt and Drew Worrad registered goals, while Gorsuch put the finishing touches on a 26-save shutout.

The two victories bring the Broncos’ record to 2-1 after falling to Bowling Green in their season opener; Ferris State is now 0-2 in NCAA play after exhibition wins over USA Hockey’s National Team Development Program Under-18 Team and Lethbridge.

Saturday comments from the Broncos: