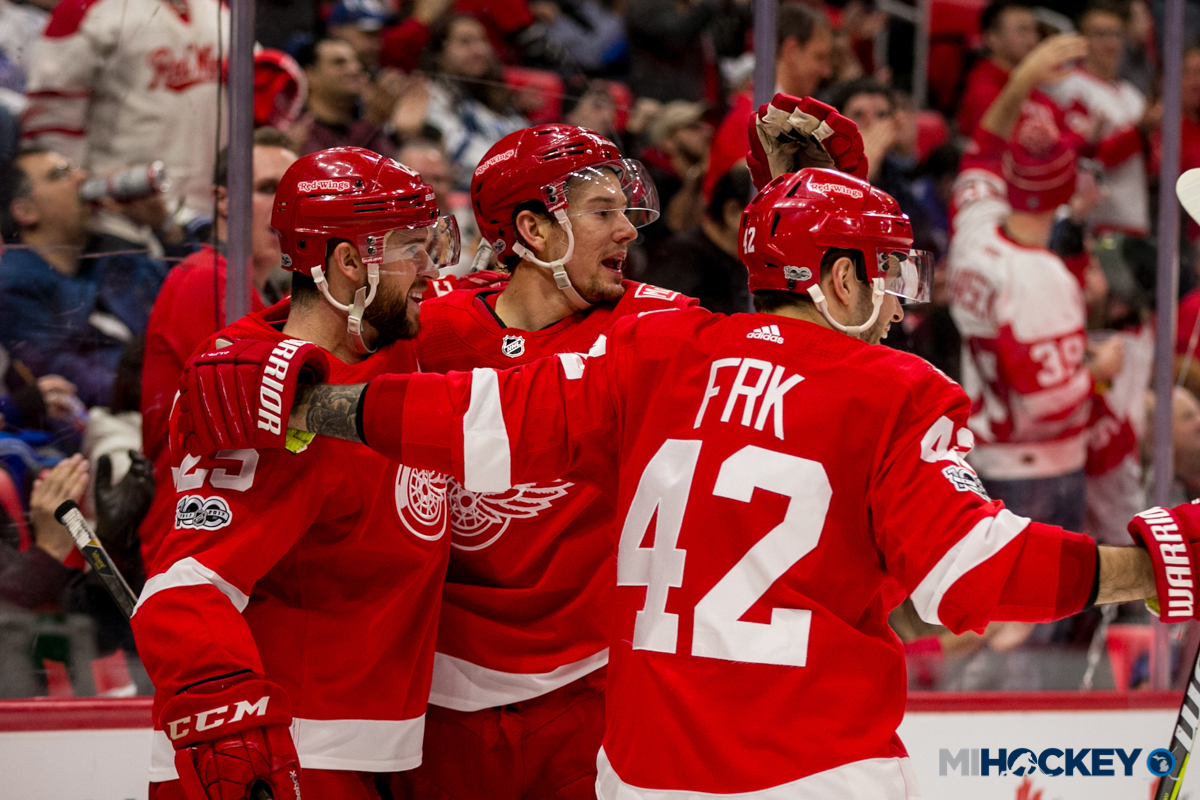 That’s not something you’ve been able to say often this season, so the team is certainly embracing it.

With a 4-2 win over the Florida Panthers Friday night at Little Caesars Arena, Detroit extended its season-high win streak to four games – the first such streak since the Wings won six in a row in October 2016. Andreas Athanasiou scored to continue his red-hot stretch, while Tomas Tatar, Anthony Mantha and Gustav Nyquist also found the back of the net.

“I think we’ve done it right, not had results; we’ve got to keep doing it right,” Red Wings head coach Jeff Blashill said. “They won more puck battles and puck races and they hemmed us in our zone, no doubt about it, for the first and second. I’ve also said lots, you look around the league: I don’t know how many teams win without elite goaltending and we’re gonna play a team on Sunday that night-in and night-out gets elite goaltending. And I think that’s what Jimmy’s been giving us, and now you’re in every game, now you’ve got to make a play to win and we made some plays there late.”

Jimmy Howard has certainly been “elite” lately, having posted a .961 save percentage in this four-game win streak. He earned the win in goal Friday with a 38-save effort and has allowed two or less goals in each of those games.

On the first shot of the game, just 42 seconds into the game, Athanasiou struck again.

That marked a combined 48 seconds between goals for Athanasiou, as it took him just six seconds into overtime to put away Ottawa the previous game.

Near the halfway point of the game, Tatar finished a passing play with Athanasiou and Dylan Larkin for his 11th of the season. For Larkin, it marked his 28th assist of the season, moving him closer to a top-10 league rank in that category.

“It’s definitely a good feeling when the pucks are going in and you’re helping your team out,” Athanasiou said. “I think any time I get a chance to help the team out and produce for them, it’s good for me and good for the team.

“I think it’s just the opportunities are presenting themselves, and I’m just taking them as they come. I don’t really look for the shots, they kind of just blend into the play.”

The Wings appeared to take a 3-0 lead late in the period, as Jonathan Ericsson’s point shot hit Justin Abdelkader’s outstretched glove in front, popped up in the air and dropped in the net behind Florida goalie James Reimer. However, video review determined the puck clipped Abdelkader’s stick, which was above the crossbar, before it made contact with his glove.

And with just two seconds to play in the period, Florida defenseman Mike Matheson scored a gorgeous goal to put his Panthers on the board. Matheson received a pass at the Detroit blue line, pulled a spin-o-rama to get around Mike Green and then cut to the forehand while falling to tuck the puck into an empty net past Howard.

Shots to end the frame were 29-11 in favor of Florida despite the Wings’ one-goal lead.

But with 11:57 to play in the third frame, Martin Frk one-timed a bomb just above the left circle to put Detroit up 3-2, a power-play tally. Mantha got a piece of it on the way in for his 14th of the season. In fact, the shot came in with such force it broke Mantha’s stick.

Howard continued his stellar goaltending the rest of the way, including a huge glove save to keep Florida at bay. Nyquist added an insurance tally for Detroit, a breakaway goal off a great backhand stretch pass from captain Henrik Zetterberg. The assist marked Zetterberg’s 600th career helper.

“It’s always fun to reach a milestone like that, and it’s nice when it comes combined with a win,” Zetterberg said.

“I’ve been around for a few years here, so [the fans have] been behind me in good times and bad times, so I’m happy it happened here at home.”

The Wings host Tampa Bay on Sunday before heading into their league-mandatory break. Detroit will head to Pittsburgh on Jan. 13 following the break.

“It’s gonna be a great test for us,” Howard said of Tampa Bay. “They’re a great, great hockey team, and we’re gonna have to find a way to shut down their top line and get in [Tampa Bay goalie Andrei] Vasilevskiy’s face. He’s seeing the puck real, real well right now, and he’s really in a groove, so it’s gonna be a tough test for us.”