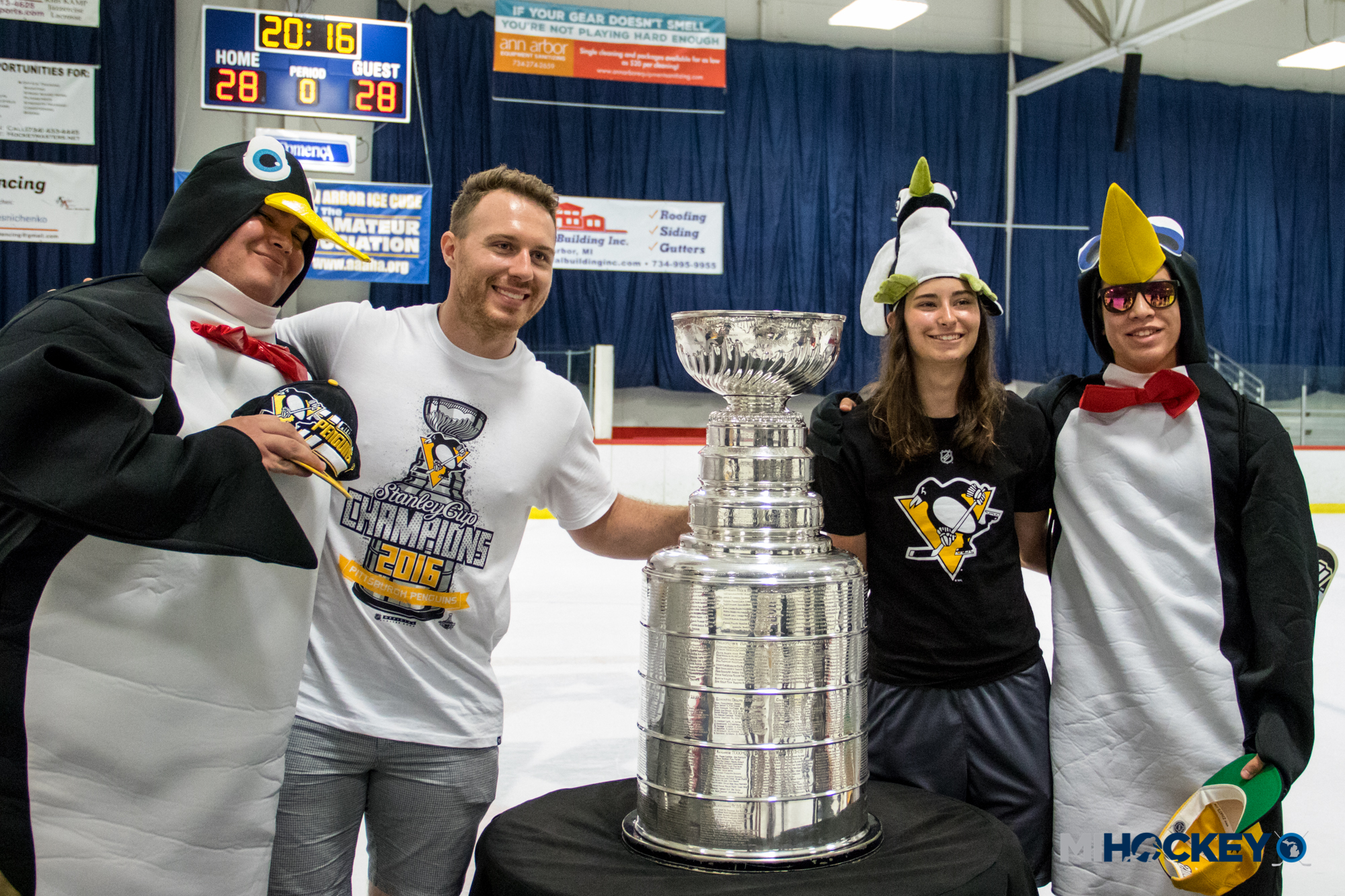 Ian Cole took Lord Stanley’s Cup on a tour of some his favorite places Friday – all with the goal of sharing his moment with his community and the hockey people within it.

Cole – an alumnus of USA Hockey’s National Team Development Program and Notre Dame – was one of five Michigan natives on the Pittsburgh Penguins’ Stanley Cup championship roster. He kicked off the Michigan contingent’s ‘Days with the Cup’ by taking it to Yost Ice Arena, Angelo’s restaurant, C.S. Mott’s Children’s Hospital and the Ronald McDonald House in Ann Arbor before stopping at the Ann Arbor Ice Cube.

“It’s really special,” Cole told MiHockey while setting up the legendary trophy for fan visitation on the ice at the Cube. “I think any time that you have an opportunity – this opportunity – and you’re able to bring it back to your home state, your hometown, and really share it with the people, bring it out to the people, have a public thing like this – earlier we went to the Children’s Hospital, to the Ronald McDonald house, any time we’re able to do stuff like that – that’s really what the trophy’s for, right? It’s for, in my mind, sharing it with people after you’ve won it. We’re trying to do that to the best of our ability so far today, and so far, the response has been fantastic.”

Hundreds of people came to the celebration at A2Ice3 – a line to get onto the ice stretched through the lobby and down the hall for the locker rooms. Cole also had a private meet-and-greet in The Cube’s meeting room for close family and friends, which featured former teammates and coaches.

“It’s pretty unbelievable,” said Mark Silverman, a former baseball and soccer teammate who was Cole’s best man at his wedding. “Growing up here, he’s the first guy from Ann Arbor to win the Cup, so to bring it back here, bring it to the local rink, he played USA here, we already went to a local food joint – it’s pretty cool. He’s having a good time, and so are we.”

Cole’s mother, Connie, was wearing a Penguins No. 28 ‘Cole’ jersey for The Cube festivities, and she found some time to brag about her son while making sure things were running smoothly for all parties.

“It’s just amazing,” Connie Cole said. “It’s something that when a kid has a dream…I mean, how many people even ever have a job that they love? And to dream of that job as a little kid and you actually accomplish it – it’s something else. Who else gets to do that? Not many people. I’m so thrilled and proud of him. When he was a little kid, I always told him, ‘God gave you a gift, and if you work hard with it, your dreams can come true. And he gave you a gift to use it well after your dream comes true, to pass it forward.’ I’m proud of him as a human being and as an athlete. Amazing stuff.”

She wasn’t surprised that her son wanted to share his day with the Cup with his hometown.

“Ann Arbor, we’re a big small town. It’s a small circle, as hockey is a small circle,” she said. “I always told Ian to keep his nose clean and stay out of trouble because hockey is a small circle. It was important to him that he wanted to go over to children’s hospital, Mott’s, and then Ronald McDonald house. He loves kids. He’s sorry he’s in a family of just two kids – he always wanted more siblings. He’s just very community-minded. We tried to teach him that as a little kid. You know so many people in town – you know a nurse, or a doctor, or someone who is over there. I would have loved to have him take it to a few retirement homes…but he just ran out of time. It’s sad that he only gets it one day.”

And while it seemed like a busy day – the Stanley Cup tends to attract a crowd – Cole said he was loving every minute of it.

“It’s a ton of fun,” the Ann Arbor native said. “It’s unbelievable. Seeing everybody’s excitement, seeing the kids light up, seeing them ask, ‘can I touch it?’ And I’m like, ‘yeah, give it a hug if you want.’ It’s really special.”