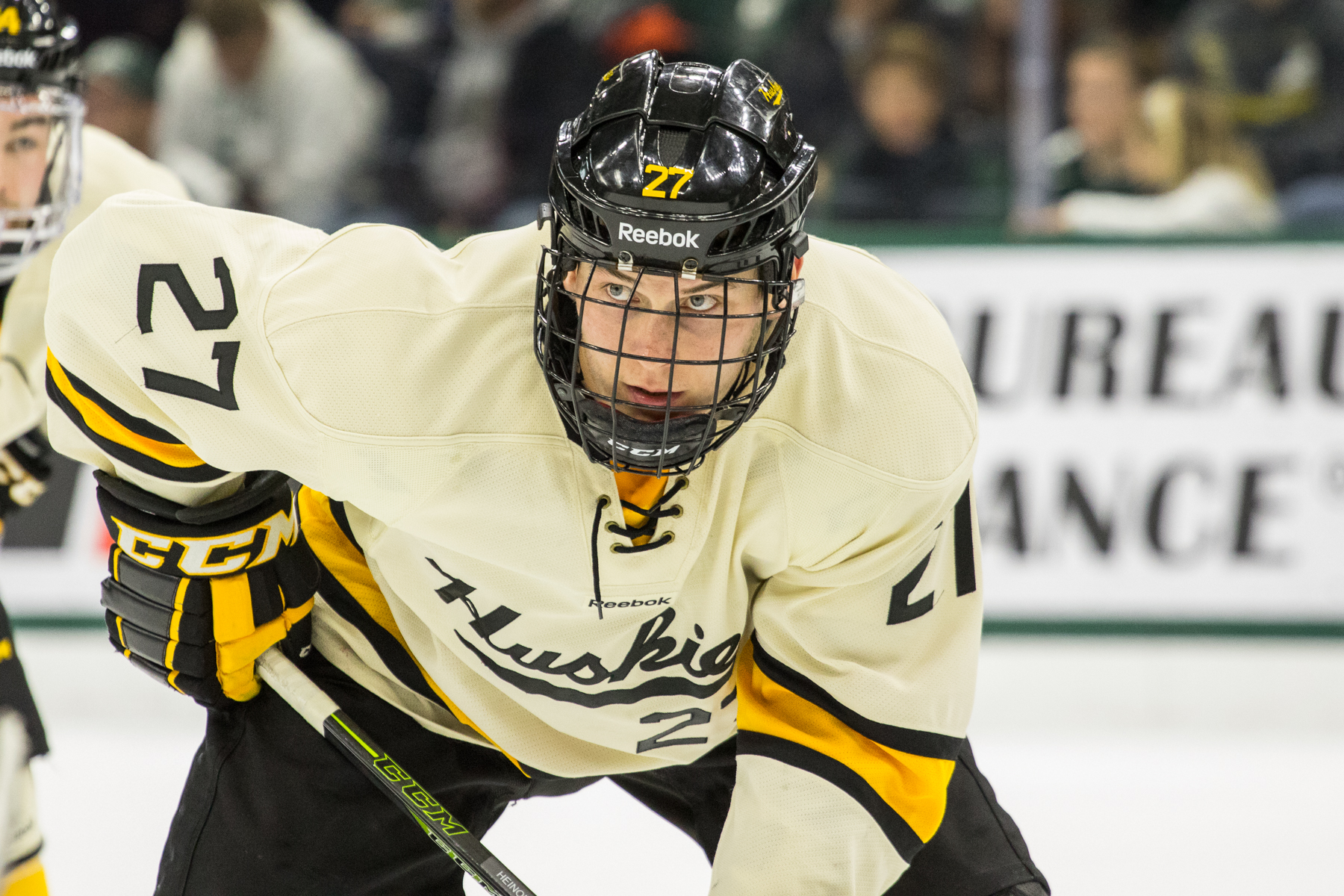 Last summer, Tyler Heinonen had just finished his sophomore season at Michigan Tech University and wanted to stay in Houghton for the duration of the extended break.

Only problem was that an income source was nowhere to be found – until Heinonen realized that a likely source was right under his nose.

For eight weeks this last summer, Heinonen and a handful of Huskies’ teammates ran the Total Skills & Power Skating hockey school at the team’s home rink at the MacInnes Student Ice Arena. The school was in session for four weeks in June and then four in August (before and after the Michigan Tech Hockey camp that brings in 300-plus out-of-town players).

“When I first thought of the idea, I talked to a couple people in the athletics administration to find out what needed to be done to get it started,” said Heinonen. “Then to get the word out, I have family up here and I go and watch my little cousins play when I can, so I reached out to the youth program here and talked to people I know in the community to help spread the word.”

The 22-year-old Heinonen served as the coordinator and lead instructor of the school, while teammates Joel L’Esperance, Matt Wintges, Brent Baltus, Devin Kero and Alex Gillies were additional instructors.

The school taught on-ice power skating and off-ice shooting, passing and stick handling to a total of 154 kids from Mites all the way to the Bantam level.

“Tyler created the program content for everything and led the other Huskies for instruction,” noted MTU director of recreation, programming and membership Jada Gullstrand. “He was very professional with the parents and very sincere with the kids. The participants loved being able to learn from the Huskies and get to know them on and off of the ice. I am really proud of what was accomplished and I’m thankful for the guys and the time they spent making these connections with the younger players in the area.”

Once the school was advertised and the waiting game began, Heinonen admitted he was unsure if his idea would be a hit, but once the school got rolling, he was very confident and satisfied.

“Yeah, to be honest, I wasn’t sure what to expect,” he said. “Then a lot of kids showed up and we knew we could make it work. We didn’t encounter any real problems, only to realize that drill plans for Mites would need to be different for Bantams. Mites have a little less attention spans, so we had to keep them moving out there.”

Heinonen added that having the break in the middle of the eight-week program was “huge.”

“I think if we had gone eight weeks straight, that would have been a bit much for these kids, especially in the summer,” said Heinonen. “If we do this again next summer, I think we might look at doing two three-week programs, something like that. It’s summer, and these kids want to be out enjoying summer and the sunshine, but they also want to find ways to stay on the ice. If we do this again, I think it’ll be a lot smoother at the beginning because we won’t be starting from scratch. We’ll all have that first year of experience to lean on.”

According to Gullstrand, the school has made Heinonen more noticeable around Houghton.

“Tyler is such a great role model for the kids in this area,” Gullstrand said. “He was good to work with (Gullstrand was the administration member that oversaw the school) and on the ice or in the office, he’s a great employee. I think this school allowed him to shine as a person and the kids really got to see a different side of him. At games, they only see him on the ice, but at the school, the kids really got to know the Huskies as people and that goes a long way with these kids.”

Gullstrand added that having Total Skills next summer is a definite possibility, but seeing when the rink has open ice is something all involved will look at towards the end of next spring.

Heinonen, a native of Delano, Minn., having family in Houghton was one of the reasons he chose to commit to MTU while playing for the USHL’s Chicago Steel three years ago.

And having a new coach on board was another selling point.

“My dad went to Tech and my mom is from Marquette, so I have all kinds of ties here,” Heinonen said. “I grew up watching Tech play and then when Mel Pearson took over as head coach and really started to take the team in the right direction, I knew I wanted to be a part of that. My first year here, I came in thinking I knew it all and only played 14 games – I still had a lot to learn about college hockey.”

This season, Heinonen leads the Huskies with 11 goals and is second in points with 18, one behind Alex Petan’s 19.

“We maybe haven’t had all the success we wanted so far, but we ended the first half on a good note (10-6-2 overall, 9-6-1 WCHA),” said Heinonen. “We want to come back from break strong and have a big second half. Our goal is the same as it always is, to win a league championship. You do that, you get into the NCAA tournament and then you want to win that.”