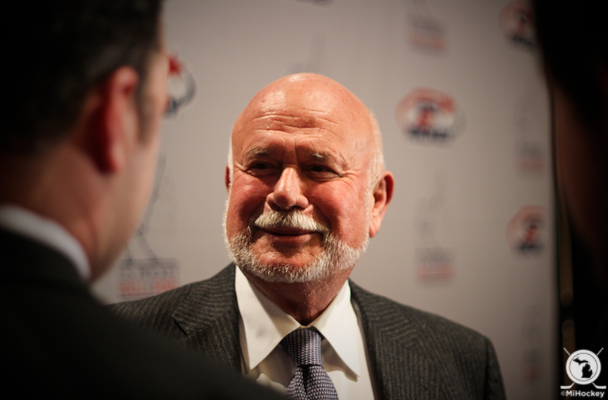 Being the founder and CEO of a major corporation doesn’t exactly leave much time for anything outside of work.

That was the struggle Peter Karmanos – a co-founder of Compuware Corporation and the Detroit Compuware ‘AAA’ hockey organization – dealt with early on in his business venture. However, it was the game of hockey that ultimately brought him closer to his kids and led him to a career in hockey.

“I remember my second oldest son, for the first few times I took him skating with me in the back seat, he’d reach over to tap me and say, ‘Mom, Mom!’ and I’d say, ‘No, I’m not your mom, I’m your dad.’ It took two or three trips to the rink before he started calling me Dad. That’s how little time we’d be spending with those kids.

“Tom Thewes, one of the founders of Compuware along with myself, had a couple boys the same age. That gave us a great opportunity. Once we both got there, we became enthralled with the game of hockey… Hockey gets you a lot of family time.”

Karmanos was inducted into the U.S. Hockey Hall of Fame on Dec. 2 at Motor City Casino in Detroit for his contributions to the hockey world as a builder and owner.

While youth hockey in Michigan has certainly transformed over the years, Karmanos said he believes it’s heading in the right direction, as “youth hockey has never flourished more than it is in Michigan.”

However, he expressed his strong concern with the ever-rising cost of playing, which inhibits many kids from ever getting the chance to strap on the skates.

“I think one of the things we can do in USA Hockey and in the NHL is try to figure out what we can do with energy, saving energy and cutting the cost of ice,” Karmanos said. “When my oldest son started skating, he’s 47 now, ice was $40 per hour. I think, now, ice is closing in on $300 per hour. By the way, you could buy a wood stick for a reasonable price; now, you can’t buy a stick for a reasonable price… We’ve got to work on it.”

Whenever a youth player graduates from the Compuware ranks to the junior or college ranks, and perhaps eventually the NHL ranks, Karmanos said he takes a sense of pride in that.

“They go to a lot of different places. They’ll go play college hockey or junior hockey. It’s always a thrill every time, except when we’re playing against them, to see them play. ”

Karmanos captured a Stanley Cup in 2006 with the Hurricanes along with Detroit native Doug Weight, who was also inducted into this year’s class.

When it all comes down to it, however, Karmanos said he believes the key to running a successful business or organization is actually quite fundamental.

“You’re loyal to good people, that’s an important part, even in business. Having respect for the people that you work with and having loyalty are things that help you make a great organization.”