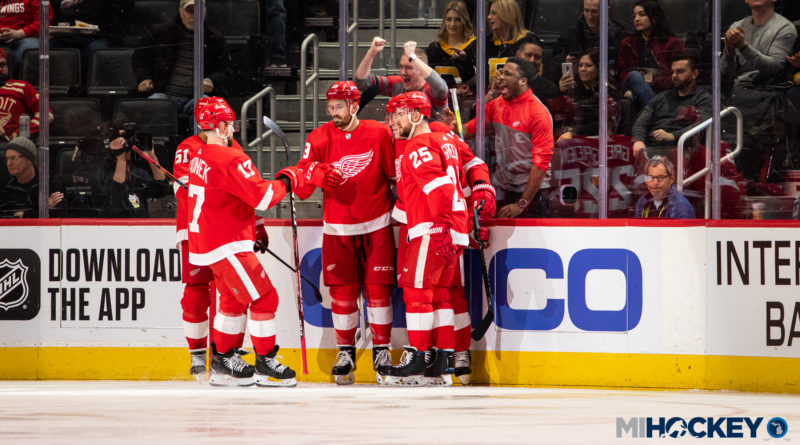 Perhaps one of the most unique aspects of the 2021 NHL season is the the schedule often pitting teams against each other in consecutive games.

Following the Red Wings’ season-opening loss to Carolina on Thursday, arguably one of the division’s top teams, Detroit had a chance at redemption Saturday night instead of hopping on a plane to the next city and starting anew.

And fueled by newly-minted captain Dylan Larkin’s first two goals of the season and two helpers from Filip Zadina, the Red Wings rebounded with a 4-2 win over the Canes.

“It’s unique in the NHL for sure,” Red Wings head coach Jeff Blashill said. “It’s not unique in the American league or in college where I coached before. This is what you kinda face. What it does do and I think it’s a positive, is it just continues to build up the animosity in the game. I think that’s a good thing. The competitive level is super high and so again the second night in a row where I didn’t feel like there was an empty building. It felt super competitive, and it felt real normal that way. I think part of that is because you’re playing the same team in a back-to-back.”

Robby Fabbri potted the game winner on a feed from Zadina late with 2:42 left to play. Jonathan Bernier turned aside 29 of 31 shots to earn the win in net. Bobby Ryan also scored his first in a Wings uniform, and fellow newcomer Vlad Namestnikov was around the puck all game and had a number of quality scoring chances.

“I thought we improved everywhere obviously,” Larkin said. “We played a great team game tonight. I thought we managed the puck a lot better. We played together as a team and for the D corps they have over there, they all can skate, they’re all big bodies. I thought they looked pretty tired at the end. We just grinded them down, got pucks behind them and played a lot with the puck, so we got out of our zone efficiently and made their D turn. It feels really good to have the two points tonight against those guys.

“I’ve talked about the energy that the new guys have brought in; they’ve all played on teams that have played in the playoffs in recent years and have been in big games,” Larkin said. “I just felt the calmness from a lot of the new guys that we just have to keep going, we’re not gonna get frustrated and as someone that I guess unfortunately we saw it a lot last year where we’d start the first period, they would get one early like they did and that was it. We were in our own heads. I didn’t see that from any of those guys and we just kept going. We scored huge goals and timely goals and I thought we outplayed a great team tonight.”

Detroit will look to build on their first win, as they next host Zach Werenski and the Columbus Blue Jackets on Monday (12:00 p.m.) and Tuesday (7:30 p.m.) before heading out on the road for the first time to face Chicago on Friday and Sunday at the United Center.