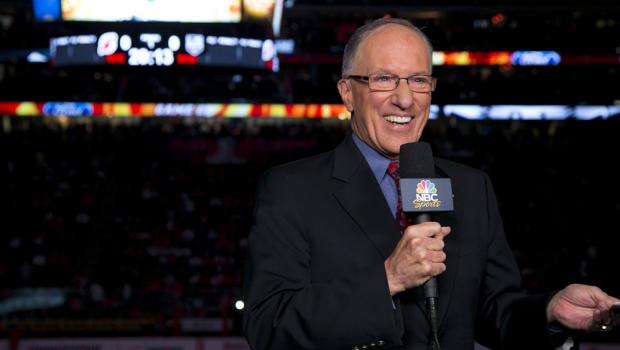 He was the voice of hockey in living rooms across the nation for decades.

Mike “Doc” Emrick announced his retirement from hockey broadcasting Monday morning after 47 years in the field and most recently wrapping up the 2020 Stanley Cup Final in Edmonton.

“It was 50 years ago this fall, with pen and pad in hand at old Civic Arena in Pittsburgh, I got my first chance to cover the National Hockey League,” Emrick said in a video released by NBC Sports. “Gordie Howe was a Red Wing, Bobby Hull was a Blackhawk, Bobby Orr was a Bruin. … A time like this makes me recall that we have seen a lot together. The biggest crowd ever, 105,000 at Michigan Stadium. A gold medal game that required overtime between the two North American powers in Vancouver.”

After 3,750+ Professional and Olympic hockey games, 100 different verbs used to describe a pass or shot, and 22 Stanley Cup Finals, the legendary Mike “Doc” Emrick has announced his retirement from broadcasting.

From hockey fans around the world, we say #ThankYouDoc! pic.twitter.com/Pt27Dp63TW

The man simply referred to as “Doc” earned the nickname after he graduated  from Bowling Green State University with a Ph.D. And of course he called hockey there from 1971-73.

In 1973, he got his start in professional broadcasting with the Port Huron Flags, then an International Hockey League franchise.

Among his honors, Emrick received the NHL’s Lester Patrick Trophy in 2004 for his “outstanding service to hockey in the United States,” as well as the Hockey Hall of Fame’s Foster Hewitt Memorial Award in 2008 for his contributions to broadcasting.

Coleman and others around the league shared some of their most memorable Emrick calls: