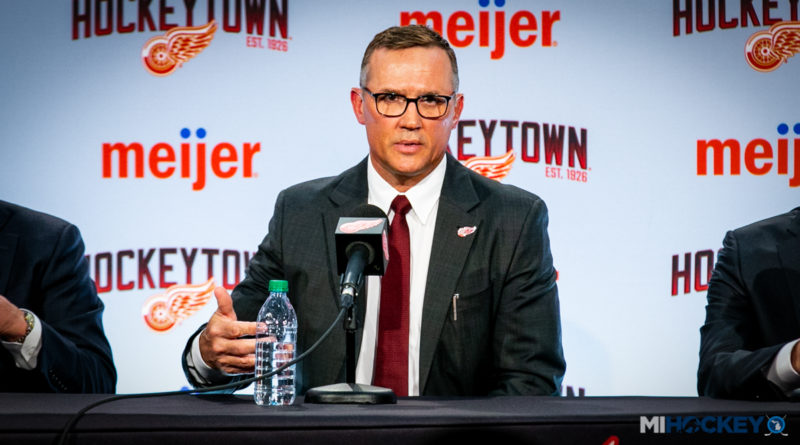 With the National Hockey League announcing the conclusion of the regular season on Tuesday, the Detroit Red Wings’ season officially ended at the same time.

What follows, instead of the traditional “locker clean-out day” media scrums and press conferences, is a series of Zoom calls between Red Wings’ personnel and members of the media.

Wednesday was Steve Yzerman’s turn to take the digital microphone, as the Detroit general manager spoke about the team’s first season under his guidance and the unique end to the 2019-2020 season.

“We’ve been quite busy, between reviewing last season, having different hockey department meetings done over the internet, virtually, preparing for the draft, preparing for free agency, doing some budgeting for next season,” Yzerman said when asked how he’s spending his time these days. “We’ve found ourselves pretty busy throughout the week. My time, hockey-wise, has been occupied regularly, constantly.”

The biggest news item out of his virtual press conference was the status of head coach Jeff Blashill. Yzerman said that the statement he made in February about not having any plans to change coaches remains true today.

“That’s what I said, or I guess that’s what I inferred [in February],” Yzerman said. “I have no plans of making a coaching change at this time.”

It’s been the hottest topic in Hockeytown for some time, as the Red Wings continue to struggle in the standings during their rebuilding process. They have the top odds to land the first overall pick in the June 26 NHL Draft Lottery – because they finished in last place during the shortened regular season.

Blashill’s boss came to his defense Wednesday, saying that you can’t judge a coach’s performance when he’s working with an inadequate roster.

“I think Jeff has done a good job,” Yzerman said. “I think it’s been a difficult position. In his tenure here, the Red Wings are in a rebuild. They have been for a while, and the last two, three trade deadlines, the team has traded valuable players, good players, for future assets. Jeff has, with his head held high, diligently worked hard, done a good job in coaching this team in a difficult situation. Throughout that, I think, as I said in February, I think it’s unfair to judge him based on our record at this time. Quite frankly, we need to improve the team for anybody to truly critique or assess the coaching staff. We need to improve the team.”

The two have not had a specific conversation about Blashill’s future with the franchise, however.

“We’ve never specifically had a conversation…he’s the head coach of the team, I’m sure he heard my comments in February. We’ve talked about our team, we’ve talked very openly about our plan, what we’re trying to do, where we’re at presently and where we’re going, and we intend to here in the offseason discuss our team moving forward.”

As far as the rest of the coaching staff goes, Yzerman said that’s really up to Blashill.

“You’ll get an opportunity to talk to Jeff about that. He and I will discuss the offseason, the plans for the offseason, and I may have some say in it, but it will be his determination on whether he wants to make any changes on his staff.”

Captain to be named soon

Yzerman said he expects to name a captain before the start of the 2020-21 season, but would not give an expected date for an announcement. There is no official word on when the playoffs will begin for the 2019-2020 season, let alone a start for the following campaign, though commissioner Gary Bettman hinted at a possible Jan. 1 start date coinciding with the Winter Classic.

“The plan is to name a captain prior to the start of our next season. I can’t really give you a timeline on when we’ll do that, but that is the intention.”

Later in the press conference, he was asked about his impression of Dylan Larkin, who would be the assumed frontrunner for the captaincy.

“You know, I didn’t know him very well,” Yzerman said. “I don’t think I was at the Combine his draft year, when he was selected by the Red Wings, so I didn’t get to meet him then. Obviously, I knew the player very well as an opponent and as a prospect watching him through his time at Michigan and the [NTDP] and him playing for the Red Wings when I was in Tampa. I’ve gotten to know him, he’s a dedicated professional. He’s a hard worker. He’s very competitive. He’s a very good hockey player, and I’ve enjoyed my conversations with him and discussions about hockey and our team and whatnot throughout the course of the season. I’m very impressed with him, and being a member of the Red Wings and improving this team is very important to him and he takes it seriously, so, he’s an excellent player for us, he’s a very important player, he’s a great leader and he’s dedicated and mentally strong and committed. I’ve been very impressed really getting to know him over the course of the year.”

Yzerman was reminded of how he said he would like to spend his first year ‘observing’ the organization, and asked what those observations were as he heads into the offseason.

“You learn a lot about the players, you get to know them personally and you get to know them better. We’re assessing them, whether it’s a veteran potential unrestricted free agent who we are debating re-signing or where are we at with our young guys. You get to know them on the ice, off the ice, are they part of the plan moving forward, are they not. That goes for everybody, the entire organization, maybe if I used the word ‘observe’ it’s more ‘observe and assess’ because really, that’s kind of my job to decide how can we improve the team, what areas do we need to improve the team and what areas do we need to make changes. We spent the entire year doing that from top to bottom, and we’re trying to run a good program to develop our young players, rebuild and get the team back on track which I’ve said is going to take time. I don’t know if I’m really shocked or whatnot by anything, I didn’t know what our record was going to be going in – whether it was what it was, better or worse, not sure – we’ve felt it was going to be a stretch to be a playoff team, and we weren’t a playoff team, obviously. I’m not totally shocked by anything. I’ve learned a lot about our organization, I feel I have a good handle on what the next steps are that need to be taken, and ultimately we need to continue to draft and draft well and run a good development program to get these young players to fulfill their potential. That’s the plan, that’s the most important thing and ultimately the only way we’re going to get it turned around.”