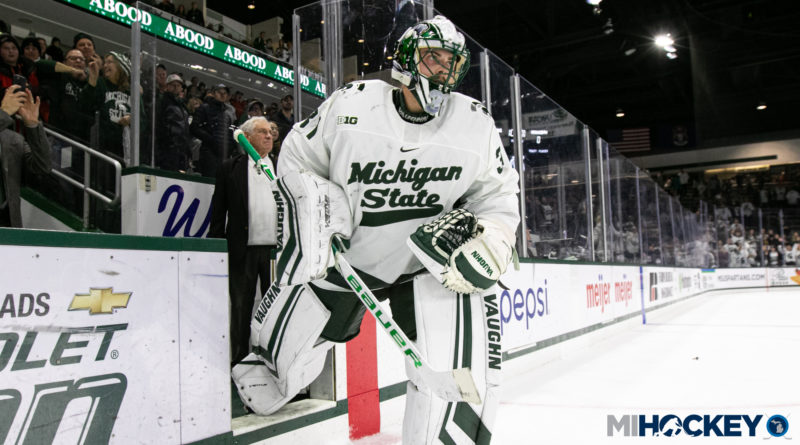 There was some strong goaltending from the two Michigan-based Big Ten schools this past weekend, and it was recognized by the conference today.

Michigan State’s John Lethemon was named the B1G first star of the week today, while Michigan’s Strauss Mann was the second star.

Lethemon, a Northville native, led the Spartans to a weekend sweep of the No. 19 Wisconsin Badgers on Friday and Saturday. In the first game of the set, he posted a 41-save shutout in a 3-0 victory. Saturday, the Spartans won 5-4 in overtime fashion; Lethemon made 33 saves in the contest.

In total, Lethemon made 74 saves over the weekend and finished with a .949 save percentage. His three shutouts on the season leads the Big Ten.

Mann, meanwhile, led Michigan to a 4-1 win over No. 6 Penn State Friday night on a 34-save outing. The following night, the Wolverines fell 3-1, but it wasn’t because of the sophomore goaltender from Greenwich, Conn., as Mann stopped 31 shots sent his way.

Michigan is now off until the Great Lakes Invitational; Michigan State hosts Arizona State this weekend.