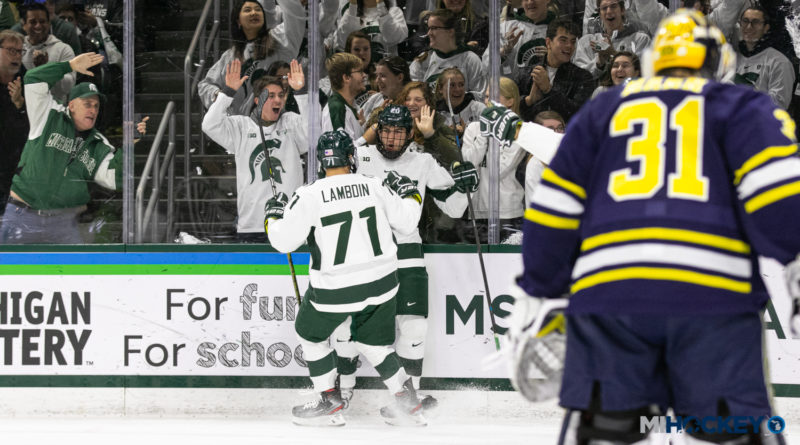 EAST LANSING – On Thursday evening in Ann Arbor, the Spartans needed a third-period comeback to beat the Wolverines in Round 1 of their rivalry weekend series.

In Round 2, they didn’t wait as long.

A goal from freshman Josh Nodler 1:59 into the rematch gave MSU an early lead, and they never let it go, prevailing over Michigan 3-0 Saturday night in East Lansing.

Austin Kamer and Tommy Apap also scored for the Spartans, while John Lethemon picked up his second win in as many outings between the pipes with a 35-save shutout.

“I thought we were just confident,” Lethemon said on what was working for his team in the weekend sweep. “The week before against Penn State, we were able to build some momentum there, get a little confidence that we can play with the best teams in the nation here. Obviously being rivalry weekend, that amplifies it a little bit more, but just sticking to the process, coming into the rink every day and working hard and trying to get better every day and going from there.”

It’s the first weekend sweep of the Wolverines for the Spartans since November 2009.

“It’s been a while,” said Apap, one of the Spartans’ co-captains. “I didn’t know it was a decade, they just told me that, but yeah, that’s big for us. We always want to beat them, every weekend, every game, but to win on the road in a tough atmosphere and then come back here and really step on ’em, that was big weekend for us.”

Saturday night’s win moves Michigan State to 5-5 on the season and 3-1 in Big Ten play.

“I liked a lot of things tonight, but probably most important for us was the battle and the resiliency,” said MSU coach Danton Cole. “There were a lot of times we had to answer the bell, killing penalties or blocking shots, Michigan had a little momentum going when it was 1-0 in the second and we kind of had to hunker down and get our game back, but I liked the way the guys answered, and that’s something we take a lot of pride in around here, being resilient and working hard. It was good to get out on the right side of it, and I’m real proud of the way our guys played both nights.”

Strauss Mann started the game for Michigan; the sophomore netminder was replaced after the Spartans’ third goal by Hayden Lavigne. The duo combined for 23 saves in the contest.

The Wolverines are still looking for their first Big Ten win; Michigan is 0-5-1 in conference play and 3-7-2 overall.

Michigan was held scoreless on five power-play opportunities; they also out-shot the Spartans 35-26 over 60 minutes.

Nodler’s goal, his second of the season, came on a redirect of Tommy Miller’s point shot less than two minutes into the contest. Logan Lambdin also assisted on the play.

That was it for scoring in the first period; the two teams tied with eight shots apiece.

In the middle frame, the Wolverines came out swinging, but the Spartans weathered an early storm before Kamer and Apap’s goals.

Kamer managed to sneak a shot between Mann’s arm and chest to give Michigan State a 2-0 lead at the 11:38 mark of the second period – assisted by Adam Goodsir.

Less than two minutes later, Apap buried a rebound in a scramble in front of the Wolverines’ goal, chasing Mann with his third goal of the season at the 13:22 mark.

Michigan out-shot Michigan State 12-6 in the final 20 minutes of play, but Lethemon stopped every shot sent his way en route to the victory.