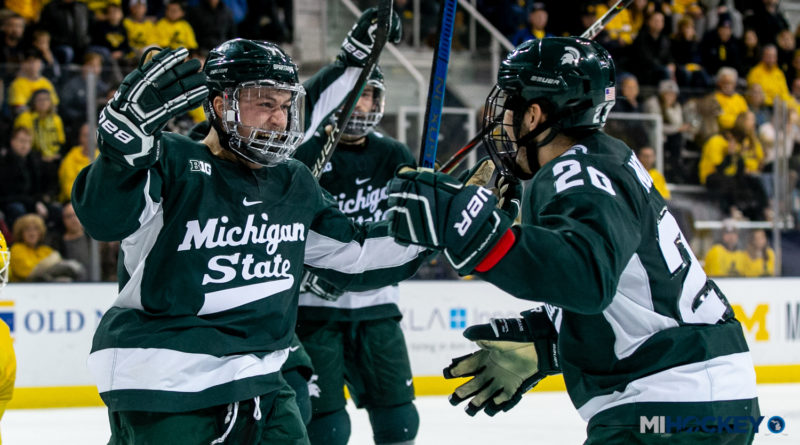 ANN ARBOR – Round 1 goes to the Spartans.

In the first of two battles between Michigan and Michigan State, the visitors rallied to win 4-3 at Yost Ice Arena Thursday night in Ann Arbor.

Logan Lambdin broke a 3-3 tie in the middle of the third period, while Patrick Khodorenko scored twice for the Spartans, and Butrus Ghafari also found the back of the net in the rivalry victory.

“When you score a game-winner at Yost, it has a special feeling,” Lambdin said when asked where the goal ranked personally. “It’s up there, right now.”

The Spartans clawed back from 2-0 and 3-1 deficits in the first 40 minutes of play, before scoring twice in the third period and out-shooting the Wolverines 12-9.

“I thought, you bus over here, guys have class and then you bus over, and it seems like it’s always that way – you have to get through and they’re flying and dealing with that in the first period,” said Michigan State coach Danton Cole, who recorded his 500th win in the victory. “I thought we did a good job and unfortunately we couldn’t get out with a 0-0 tie, they got one late, and I thought in the second we were kind of OK but I didn’t think we really started moving our feet and playing how we played better like we did last weekend until the end of the second period. Patty’s line really got us going, and then in the third we were skating and making plays. The game’s easier that way, and defensively it’s easier, too.”

At the other end of the ice, senior goaltender John Lethemon faced 41 shots from the Wolverines, stopping 38 of them.

“Our team so far this year has shown a ton of resiliency,” Lambdin said. “It’s going to stay up all year, and we’re going to be a tough team to play against if we can keep playing like this.”

Nick Blankenburg, Garrett Van Wyhe and Johnny Beecher scored for Michigan, while Strauss Mann made 30 saves in the loss.

After one day off, the two storied rivals resume their series Saturday evening in East Lansing. Puck drops at 7 p.m.

Blankenburg opened the scoring late in the first period, beating Lethemon with a shot from the slot to give the Wolverines the first lead in the contest.

In the second period, Van Wyhe extended the lead to two when he won a crease battle to smack in a loose puck.

The Spartans responded quickly, as Ghafari managed to send a wrist shot through a crowd and past Mann to make the score 2-1.

An impressive short-side snipe from Beecher regained the Wolverines’ lead. The freshman forward scored from just above the goal line to Lethemon’s right.

Khodorenko, however, scored a short-side goal of his own in the closing moments of the middle frame. The senior forward took advantage of a puck bouncing off the end boards to sneak it past Mann to make the game 3-2.

“I thought we kept to our systems, got our legs moving more in the second and third. We kind of just felt it out in the first period, didn’t really go to our advantage when we started a little slow. I thought we battled the whole time, lucky to come out on top there. Overall, a great 60 minutes.”

In the third period, Khodorenko scored once again, grabbing a loose pick off a turnover inside the Michigan blue line and eventually scoring on his own rebound.

“I definitely know a lot of guys on the other team who are seniors too,” said Khodorenko, a USA Hockey National Team Development Program alum playing against three former NTDP teammates in Luke Martin, Griffin Luce and Nick Pastujov. “it means a lot to come in here as a senior and get a win.”

Lambdin gave MSU a 4-3 lead in the closing seconds of a power play, burying a feed from Josh Nodler at the 8:51 mark of the third period.