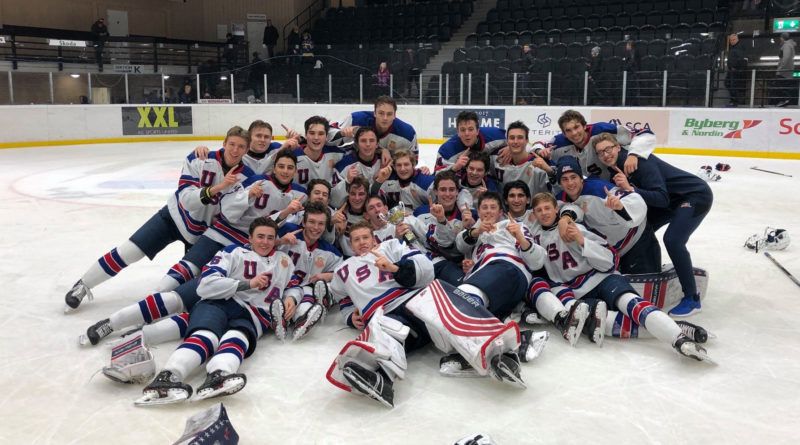 The Under-18 Team won the U18 Five Nations tournament in Sundsvall, Sweden, while the Under-17 Team claimed silver in the World Under-17 Challenge in Medicine Hat, Alberta.

The U18s were perfect in four games, giving the ’02 group their third consecutive top-three finish in international play. They finished second at the U17 Five Nations in February, and third in the 2018 Four Nations Cup last November.

Team USA started the Five Nations with a 1-0 win over the Czech Republic before recording a 6-2 win over Switzerland, a 3-2 win over Finland and a 3-1 win over Sweden.

Drew Commesso played in three games, finishing with a 0.97 goals-against average and 95.65 save percentage. Noah Grannan appeared in one contest, allowing two goals and making 11 saves.

Meanwhile, the Under-17 Team couldn’t get past Russia in the championship game of the World Under-17 Hockey Challenge, losing 6-2.

The ’03 group, in their first international tournament, recorded wins over the Czech Republic (10-1), Canada White (6-4), Finland (8-4) and Canada White again in the Semifinal (7-3). Before their championship contest, their only loss came in overtime to Canada Black, 5-4.

Chaz Lucius and Sean Behrens were named to the all-tournament team. Lucius led the tournament in scoring with seven goals and 10 total points. Behrens recorded the most assists, with seven.

The Under-18 Team returns home for a game against the Des Moines Buccaneers this Friday. Puck drops at USA Hockey Arena at 7 p.m.