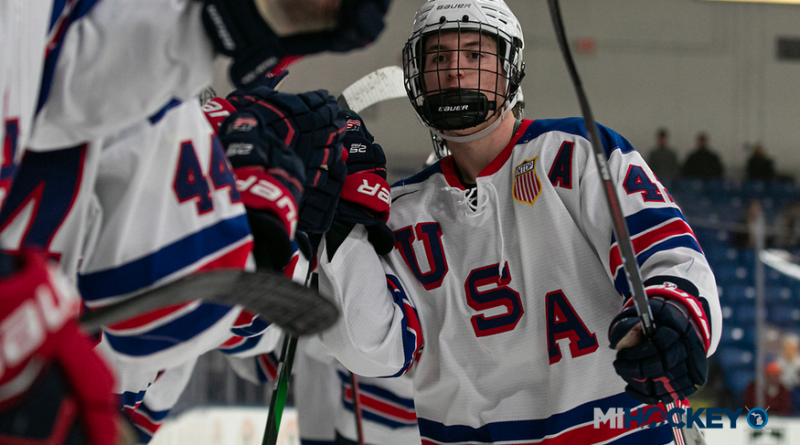 The USA Hockey National Team Development Program Under-17 Team got its first real taste of international hockey yesterday, and they must have really liked it.

The NTDP 2003 birth-year group hit double digits in the goal column on Sunday, beating the Czech Republic 10-1 in their first game at the 2019 World Under-17 Hockey Challenge in Medicine Hat, Alberta.

They are the first team to accomplish the feat in the international tournament since its eight-team format began in 2014.

Chaz Lucius and Ty Gallagher both had multi-goal games, while balanced scoring led Team USA to the lopsided win.

Our identity shone through today,” head coach John Wroblewski said via press release. “It was a good struggle in the first period. They had some good pressure and we were up to the task and we broke it open in the second. Internationally you’re going get every team’s best game and you’ve got to embrace that grind and take a game over when you can.”

After allowing a goal 35 seconds into the contest, Team USA scored 10 unanswered en route to a big victory to open the tournament.

Lucius started the scoring with a power-play goal set up by Dylan Duke to tie the game near the 5-minute mark of the first period.

In the second, goals from Tyler Boucher, Duke, Gallagher and Liam Gilmartin helped Team USA seize control of the contest and chase Czech goaltender Daniel Kral at the 7:17 mark of the middle frame.

The Americans made replacement Tomas Suchanek’s night difficult, as well, as Jack Hughes, Gallagher and Sean Behrens all scored before the end of the second period.

In the third, Lucius added his second of the night, followed by a shorthanded goal by Ryan St. Louis to wrap things up for Team USA.

Lucius finished with three points, as did Jack Hughes (one goal, two assists).

Gibson Homer recorded the win between the pipes for Team USA, posting 17 saves after the early goal.

Team USA will be play Canada White at 9 p.m. tonight in Game 2 of their 2019 edition of the tournament. Last year, Team USA fell in the seventh-place game to the Czechs in a frustrating international tournament debut for the ’02 birth-year group.