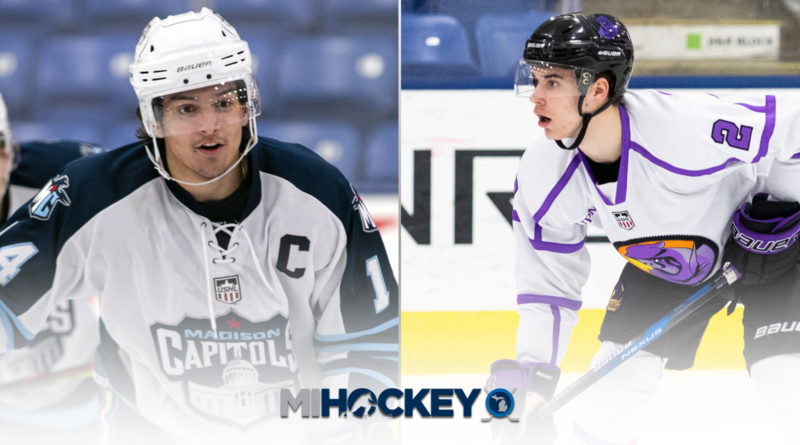 The Michigan State Spartans have officially added four players to next year’s roster.

Today, MSU announced that three players and one goaltender have signed National Letters of Intent for the upcoming 2020-21 NCAA hockey season.

“This first wave of recruits is exciting for Spartan hockey,” coach Danton Cole said in the team’s announcement. “We have great seniors and it is important that the men we have coming in are going to be able to take their place and help us to continue to grow as a program. One characteristic of our student-athletes we find invaluable is leadership both on and off the ice. This group exemplifies leadership and will help us to build our Spartan hockey family.

“This class will leave its impact on our program just as the players before them and we look forward to working together to accomplish their dreams. They will also be the first class that spends all four of their years here in the new addition to Munn Ice Arena.

“There is still some work to do to finish this class and we are excited to continue to build here at MSU.”

The Spartans have nine seniors on the roster this season, and they only brought in three freshmen over the off-season, so the recruiting class will grow over the summer.

Pierce Charleson leads the initial group from the back-end, as the Spartans fill the eventual hole left by John Lethemon’s graduation. A native of Aurora, Ontario, Charleson is the reigning Canadian Junior A champion between the pipes, as he led his Brooks Bandits to a national title last spring.

Here is an interview he did for his team earlier this season:

On the blue line, the Spartans are bringing in one Michigan native and one Illionis native.

Rochester Hills native Aiden Gallacher, a 2000 birth-year defenseman in the midst of his second USHL season with the Youngstown Phantoms, is an Oakland Jr. Grizzlies alum. He is leading the Youngstown blue line in scoring so far this season with 10 points in 15 games. Last year, he recorded a +20 rating in 37 games.

MSU quote: “A two-way defenseman with good offensive instincts … Possesses excellent ice awareness and vision … Has a quick shot release from the blue line … Uses his size and quick feet very well to defend in his own zone.”

Joining Gallacher is Calvin Dybicz, a Tri-City Storm defenseman and product of Chicago Mission. He recorded eight points in 57 games last year, while helping the Storm to a USHL regular-season title.

MSU quote: “Elite skater and defender … Breaks out of his own zone extremely well … Has excellent strength and conditioning … Possesses a willingness to play physical.”

The lone forward in the early signing period class is Kristof Papp, a Budapest, Hungary native already familiar with the Great Lakes State. Papp moved to Michigan to play one year with Belle Tire and two years with HoneyBaked before making the jump to juniors. He leads the Madison Capitols with eight goals in 16 games this year, and he has been rated a ‘C’ skater by NHL Central Scouting for the 2020 NHL draft.

MSU quote: “Highly-skilled center … Very good skater with excellent feet and edges … Has been an offensive producer at every level … His high-compete level allows him to create space and use his skill.”