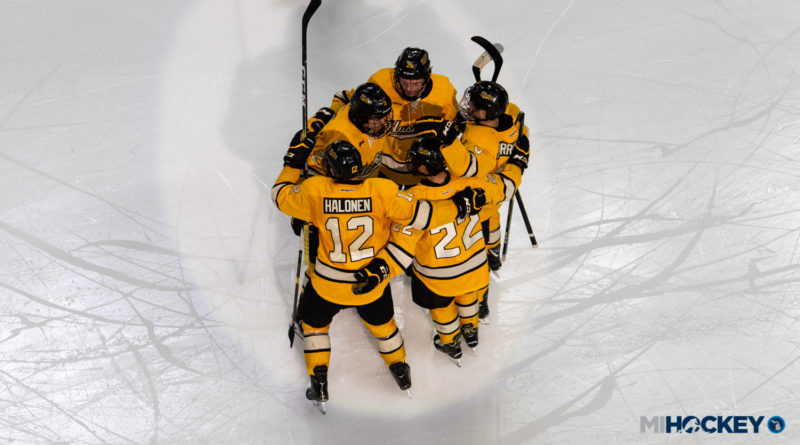 A fourth straight win for Michigan Tech was a big one Saturday night, as the Huskies pulled off a weekend sweep of rival Northern Michigan.

Goals from Raymond Brice, Alec Broetzman and Eric Gotz gave the Huskies a 3-0 lead by the end of the second period, and they ended up prevailing 3-2 in the second of a home-and-home battle at the Berry Events Center in Marquette.

MORE: Tech wins Round 1 of U.P. rivalry weekend with Northern

“Our guys did absolutely phenomenal,” Tech coach Joe Shawhan said. “We would like to get better in a lot of ways, but we’ll take them any way we can take them.

“It was a gutsy effort. Every one of our guys did an outstanding job. It’s another one-goal victory, and we’re happy we can send all of our fans who traveled down home happy.”

Matt Jurusik made 33 saves in the victory, improving to 6-3 on the season.

“It was a fun game,” Jurusik said. “That’s what it takes to win a Saturday night game on the road. We had to dig deep to pull out the victory.”

Griffin Loughran and Adam Roeder scored third-period goals for NMU, but it wasn’t enough to overcome the lead Tech built through the first 40 minutes.