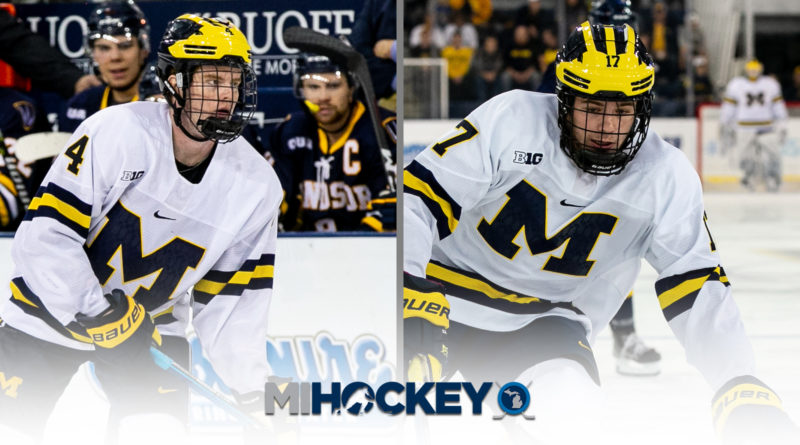 As the 2019-2020 college hockey season gets underway across the country, a talented crop of players from last year’s USA Hockey National Team Development Program Under-18 Team appear on NCAA rosters.

Two of those players found a new home very close to their old one – had they played for the NTDP five years ago, they wouldn’t even have to move to a different city.

Cam York and Johnny Beecher enter the University of Michigan hockey program with high hopes and high expectations, as they join a NCAA program with a long history of NTDP products thriving in the Maize and Blue.

York and Beecher were two of the eight first-round picks from the NTDP in this summer’s NHL Draft; York at No. 14 overall to Philadelphia and Beecher at No. 30 to Boston.

For the former, York will be tasked with filling the void left by Quinn Hughes, a fellow NTDP product who just scored his first NHL goal for the Vancouver Canucks.

“We’re hoping he can step into those skates,” said Michigan head coach Mel Pearson. “Different type of players, very similar in stature, great hockey hockey IQ in both those players. Quinn was more of a skater, he wanted the puck and he wanted to lead the charge, whereas Cam is more of a pass the puck and get into the play and follow up and support it. So far, he’s been everything we thought he was going to be. He’ll run our top power play, he’s very gifted, very smart.

“We expect and we’re going to give Cam every opportunity to pick up some of that slack offensively and defensively that we don’t have with Quinn.”

The native of Anaheim Hills, Calif., delivered in the exhibition opener for the Wolverines last Sunday, scoring a pair of goals against the University of Windsor – one of which in highlight-reel fashion you can see below.

John Vanbiesbrouck, Team USA’s general manager for the World Juniors, raved about him at the World Junior Summer Showcase, played in Plymouth just a few months after York posted the single-season record for points by a NTDP defenseman with 65.

“Tremendous, he’s above his years with patience and poise. We talk about so many of the ‘01s sometimes you don’t talk about Cam York, and how hard that is to play that position with that type of presence back there. I think we saw, we were wondering how he would play back there with getting so much pressure, and I think he played fine. No problem with his game. We’re happy he’s on our side.”

Meanwhile, Beecher joins a deep Michigan forward group, allowing Pearson to ease him into the college game. At 6-foot-3 and 209 pounds and surprising speed for his size, that shouldn’t take long.

“You know what, he’s going to be a real good player at the next level,” Pearson said. “You don’t find many guys with his combination of speed, size, strength and skill. It’s going to take him a little bit of time to get used to the college game, but he’s going to be a tremendous player. He shoots it as hard as anybody on our team, he skates as fast as anybody on our team, he’s as big of a forward as we have on our team, and again, his strength, I don’t want to say he’s as strong as some of the seniors, but he’s not far off. He’s got a lot going for him.

“The one thing about him is that he played behind some pretty good players last year at the NTDP, and maybe he wasn’t showcased or given the opportunity in the offensive situations to do what he can, and he’ll get that opportunity here. I’m really excited he’s on our team – he’s looked really good so far, but again, it will take him a little bit of time, but he’s going to be a real good player for us and like I said, a real good player at the next level. He’s got all the tools and the mental make-up you need to have success. We’re glad he’s on our team and on our side.”

As Pearson alluded to, Beecher may not have gotten the ice time he should have during a typical two-year stay at the NTDP. Having the likes of Jack Hughes, Alex Turcotte, Trevor Zegras, Cole Caufield and Matthew Boldy all battling for ice time will do that. He caught the attention of the Bruins, however, sneaking into the first round.

He surprised the World Junior staff during the summer showcase, as well.

“I mean, he had four goals, and I think he had probably eight breakaways,” Vanbiesbrouck said. “That’s a lot. When he’s killing a penalty, he’s a threat, when he’s playing north south, he’s a threat. I thought he was a big surprise…he’s in the mix to make this team, for sure.”

The NTDP duo put in a request with the Michigan coaching staff to room together during their freshman season, and Pearson and Co. approved.

“Yeah, it’s really nice to have your partner who you’ve been with for two years now,” York said. “To have someone next to you to go through the whole dorm thing and those struggles, it’s nice. We’re going to have a lot more laughs down the road.”

“We talked to the coaches about [rooming together] and they were cool with it.”

Beecher said the excitement for playing his NCAA career at Michigan was intensified by being able to play there last year, when the NTDP took on the Wolverines on Oct. 12, 2018.

“Yeah I am [excited], it’s going to be a good time. Looking at the talent we have coming in, I’m really excited. Getting in there this past year, getting a game in there and seeing their environment and how their fans operate, it was awesome. It was kind of a once a lifetime experience, playing your own college team the year before you go in, and I’m extremely excited.”

And when asked if it feels like they’ve never left the Metro Detroit area, York joked…