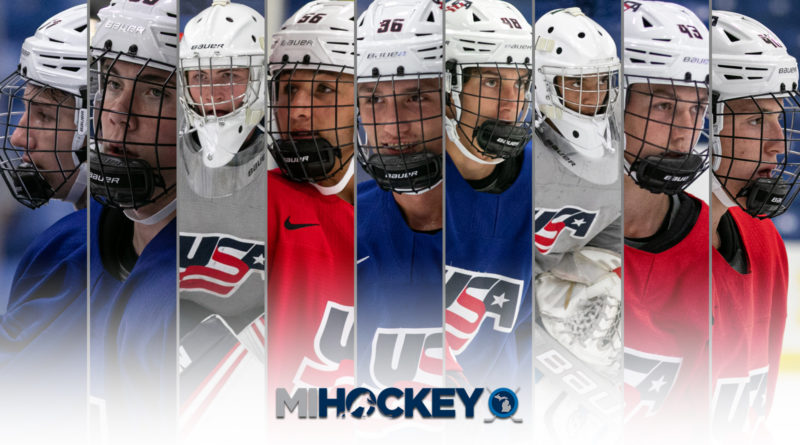 PLYMOUTH – There’s a new NTDP group in town, and the roster has a distinctive…Michigan…feel to it.

Some were born in the Great Lakes State, others moved here during their formative days of their hockey career. Eight of them were playing on Michigan-based Tier 1 teams when they came to USA Hockey Arena for the NTDP Evaluation Camp last March.

“It’s very special,” said Ty Gallagher, a Clarkston native and NTDP U17 Team defenseman. “It shows the competition in Michigan, and it keeps Michigan on the map. I’ve been playing in Michigan my whole life, and it’s great to see a bunch of guys coming out of here.”

Seems only fitting that their home debut will be against Michigan’s other USHL program, as the NTDP and the Muskegon Lumberjacks will do battle Friday night in a Michigan-centric battle to officially welcome the new U17s to Plymouth.

Here’s a look at the Michigan names on this year’s NTDP Under-17 Team roster:

The new NTDP group has played in eight games in preparation for the home opener. In their first game, Team USA recorded a 5-1 victory over the Johnstown Tomahawks of the NAHL. Along the way, they set a new NTDP single-game record with 17 goals against a Minnesota Elite League all-star team.

“It’s just such a great experience, throwing the jersey on,” said Homer, a Grand Rapids native. “It just means so much. It’s been my dream for so long, just to play here, so finally getting to do it…it’s amazing.”

For two of the Michigan names, the NTDP has long been a family affair. Sasha Pastujov and Luke Hughes follow in the footsteps of their older brothers; Nick and Michael Pastujov played for Team USA from 2014-17, while Quinn and Jack Hughes played in Plymouth from 2016-19.

“It’s a dream come true,” said the youngest of the Pastujov brothers. “Watching my brothers for four years here, obviously watching them it’s a dream to be able to wear the jersey.”

There are high expectations for this particular group of NTDP players. For the Michigan contingent, eight already hold NCAA Division 1 commitments – Duke and Hughes are Michigan verbals; Homer, Gallagher and Savage are Miami pledges; Pastujov and Straky are Notre Dame commits; and Schmidt is a Boston University verbal.

Other names to know as the players begin their two-year stay in Plymouth include:

Chaz Lucius, a Minnesota commit leading the team in scoring with 11 points in the eight games

They are the first class to arrive in Plymouth after last year’s group – the ’01 birth-year – set a new record with 17 NHL Draft picks (eight in the first round alone). The coaching structure at the NTDP sees a head coach spend both years with a particular birth-year; John Wroblewski will be guiding this particular group after coaching the likes of Jack Hughes and Cole Caufield to a historic two-year run with the NTDP the past two seasons.

Former NHLer Dan Hinote and Dearborn native Mike Leone make up the rest of the U17 Team coaching staff.

“They’re all great,” Pastujov said. “They all know what they’re doing, they know what’s best for us, and there’s not much you can ask for as a player, other than that.”