Victor Mancini has decided that when it comes time to play college hockey, he will be doing so in Nebraska.

The Saginaw native has given his verbal commitment to the University of Nebraska Omaha following his junior hockey career.

“For me, I think the biggest influence on my decision to commit to UNO was the coaches,” Mancini told MiHockey. “All the coaches have impressive coaching backgrounds, and I’ll know I’ll develop as a player while I’m in Omaha. When we’d talk, I really felt like they cared about me as a person, as well as my abilities on the ice. I felt comfortable knowing that these guys are going to have my back and look after me as if I were their own son. However, I know that those coaches expect my very best, and will push me to be the best player and person I can be.

“It’s a family atmosphere over there, and I really like the direction Coach Gabinet is taking the team. Other than the coaches, UNO is a beautiful campus, and a campus that loves it’s hockey. I believe that they play in one of the best leagues in college hockey, so I know I’ll be challenged with good completion.”

Last season, Mancini captured a state title with Little Caesars 16U while playing in three games with the Sioux Falls Stampede of the USHL and one game with USA Hockey’s National Team Development Program.

He decided that this season, however, he would suit up for a squad much farther away from home. Mancini is playing for Frolunda Hockey Club in Sweden for the 2019-2020 season.

“I decided to play for Frölunda because of their focus on player development,” said the 6-foot-3 defenseman. “In my mind, it’s about where I want to be in the future, not where I am as I player right now. All the tools, coaching, and training here in Gothenburg is amazing, and I can already see improvements in my game. Also, living in a foreign country for eight months is an unbelievable life experience. I’m extremely grateful I got the opportunity to come to Sweden to live and play.”

He’s off to a good start, too, as his squad won the U20 Mannheim Cup. 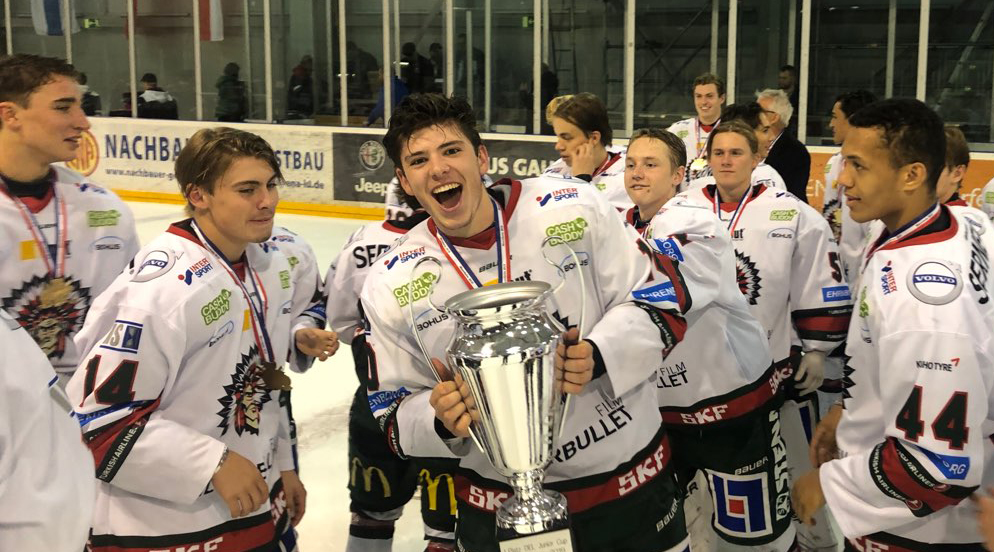 Mancini has had a unique mentor during his hockey journey; his father, Bob, is a American Development Model regional manager for USA Hockey, and a former head coach of both college (Ferris State/Michigan Tech) and major junior (Saginaw Spirit) programs.

“I’ve always seen myself as a college hockey player, because I know it’ll give me the time I need to become the player I want to be,” the younger Mancini told MiHockey. “I’m excited to represent my college everyday with pride.”