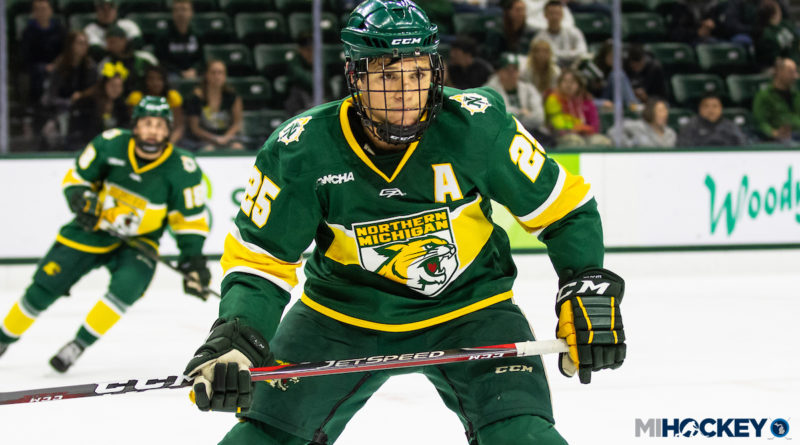 The Wildcats are losing eight seniors from last season, which includes WCHA Offensive Player of the Year Troy Loggins and two-time Goaltender of the Year Atte Tolvanen.

“Obviously we have lots of holes to replace,” Potulny said. “We have all-league players, players of the year, goalies of the year that have moved on, four senior defensemen, our first line up front and starting goaltender, so lots of new faces and lots of opportunity. I’m looking forward to seeing what some guys can do in increased roles and increased ice time.”

A silver lining from last year’s departures is they return WCHA Defenseman of the Year Philip Beaulieu, who led all WCHA blueliners with 28 points in league play (he finished with 35 in total). The Duluth, Minn., native earned All-WCHA honors for the second time in his career, and he was the conference’s defenseman of the week three times.

Potulny credited Beaulieu and his leadership group last season for getting the team through a tough beginning when goals were hard to come by, also saying he hopes his returning captain can use that experience to his team’s advantage this time around.

“There were times at the beginning of the year that we were in a position where we were having a hard time scoring,” Potulny said. “I give that group a ton of credit because the expectations were high, and then there was a situation maybe they had not been in before – I think there’s always internal pressure from your teammates, coaches to perform and execute and play well, but that was the first time I think some of those guys felt some external pressure in not starting out the year the way that they had hoped. Teams like that can go one or two ways. I think the leadership group of [Denver] Pierce, [Griffin] Loughran and Loggins… did a great job righting the ship.

“For the first time in our program since I had an opportunity to be the coach, we have a captain that’s returning: Philip Beaulieu. Hopefully he can take some lessons he learned last year in those trying times and use those this year in a positive manner.”

Potulny also credited the 5-foot-7 Loughran, who returns as a sophomore, as a key player that can set the tempo for his squad every game.

“If you look back to his career in junior hockey, when the playoffs started, he was in Fargo, he played right on the edge,” Potulny said. “That’s what we need from Griff; we need him on the edge. Because he’s an emotional player, sometimes he ends up going over the edge. He ended up being the Clark Cup MVP of the playoffs… He’s gonna be a very important player for us offensively, and there’s a responsibility to be on the rink, so that’ll be the progression for Griff. He looks great, he has great vision, he can make plays, he can score goals, and I think you saw last year he spent more time on the ice than in the penalty box, and that’s what we need out of him.

In addition to the returning veterans, the Wildcats will feature 16 freshmen and sophomores.

One of those freshmen Potulny said to keep an eye on is forward AJ Vanderbeck, along with incoming junior Brandon Schultz (a Northeastern transfer) and 2018-19 BCHL Defenseman of the Year James Miller. Vanderbeck previously posted 76 goals and 128 points in his two seasons with the Wenatchee Wild of the BCHL.

“In his two years of junior hockey, he almost scored 100 goals; he’s a gifted player,” Potulny said of Vanderbeck. “He’ll remind a lot of the people around Marquette of Robbie Payne. Brandon Schultz is another player. AJ is a transfer from Ohio State, Brandon from Northeastern. Brandon is like [Griffin] Loughran, a talented guy, has a ton of energy, a little bit undersized, but you’re gonna notice when he’s on the ice, something is gonna happen. At Christmas, we’re adding James Miller who was a defenseman of the year in the BCHL last year. I think he had 60-some points in 50-some games. He’s got the unique ability to create offense off the rush… He’s got a great shot, he’s long, he’s athletic so he’s gonna be an addition for us.

“The energy that the youthfulness can bring can be a breath of fresh air for a program, so I’m excited for the season.”

Ryckman, meanwhile, never lost any of his 31 games he played with Wisconsin-Stevens Point, going a combined 30-0-1, a tie against St. Norbert being the lone non-victory recorded. Last season culminated in a NCAA D-III championship for his club.

Potulny also confirmed that the team has welcomed forward David Keefer, a Brighton native transferring from Michigan State after two seasons. He will be eligible to join the Wildcats’ line-up in 2020-21.