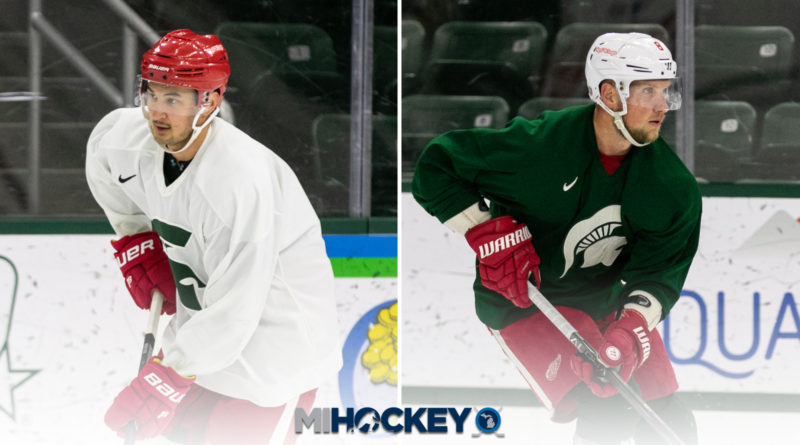 EAST LANSING – A new construction project at Munn Ice Arena isn’t keeping a pair of Red Wings from returning to their former home this week.

“It’s always good coming back,” Abdelkader said following Monday’s opening day. “I always look forward to this week, getting back here to Munn and seeing all the familiar faces and Newts does such a great job, he’s done it for so many years. Obviously the guys out here have changed over the years, now I’m one of the old veteran guys out with some of these younger ones, but it’s great, I always look forward to coming back here, to Munn, to East Lansing, being on campus.”

One of those fresh faces is Abdelkader’s new teammate, Taro Hirose. The reigning Big Ten scoring champion and Red Wings signee at the conclusion of the NCAA season is taking part in his first MSU pro camp, after spending the summer training in Metro Detroit.

“It feels really good to be back with some of the guys I played with when I was a freshman, get to see them again and catch up on old stories,” Hirose said.

“It was sort of a windstorm there [in April], a lot going on with signing and leaving and playing in the NHL, it was exciting but I’m definitely going to miss this place.”

Photos from Day 1 of the 2019 MSU Pro Camp at Munn Ice Arena in East Lansing; participants throughout the week include Abdelkader, Hirose, Mackenzie MacEachern, Jeff Petry, Mason Appleton and many more, along with guest skaters like Grand Ledge native Reid Boucher.

Hirose said that having a fellow Spartan inside the Red Wings’ locker room helped with his transition from college to professional hockey; the Calgary native impressed in his 10-game debut, registering seven points and making a strong case to be on the 2019-2020 opening-night roster in October.

“Yeah for sure, it’s awesome to see Sparty guys in the NHL, obviously having him to look up to and talk to with any sorts of questions I have,” Hirose said. “As soon as I got there, he was one of the first guys who introduced himself and made sure I was comfortable around all the guys. It’s been really awesome having him.”

For the 32-year-old Abdelkader, having another MSU product show up at Little Caesars Arena was a welcome sight.

“I tried to help him out as much as I could,” the Muskegon native said. “It’s obviously a big transition coming from college right to the NHL level. I talked to him a lot, I was hurt at the end of the year so I got to try help him as much as I could, try to give him some ins and outs and more or less just give him the message to play his game. Obviously, you’re going to be nervous, but just try to keep it simple out there and gain confidence as you go and I felt like he did a great job of that.”

They both have high hopes for the upcoming campaign with Detroit; Hirose said he’s excited to take part in his first training camp, and Abdelkader likes the young talent the Wings have to offer.

“I think we’ve been close the last few years, we’ve been on the wrong end of a lot of one-goal games,” the Wings’ assistant captain said. “We want to make sure that, first and most importantly, we have to get our goals-against down, keep pucks out of our net. That’s as a unit of five, really six with the goalie, we have to be structured and play hard defensively, and then get timely goals when we can. It’s a difference of a goal a lot of times, each night in this league, it’s not going to be easy. Our division is really tough, but I like our young talent that we have that’s starting to establish themselves as NHL players and we’ve got a good push from some draft picks over the years. It’s going to be an exciting year, and hopefully we can get back to the playoffs.”

The two will be keeping an eye on their Spartans, as well; they both said they’re happy to see construction underway on the Munn Ice Arena upgrades.

“DC [MSU coach Danton Cole] showed me all the pictures, it looks really awesome,” Hirose said. “I’m sure the guys are really excited to have it get started.”

“It’s exciting, finally breaking ground,” Abdelkader echoed. “We’ve been talking about this for years now, it’s good to finally see the shovels in the ground and we’re going forward with it. It’s exciting, it’s time for a little facelift. Obviously, they’ve done a lot inside the rink here with the stands and the lighting and the ice, but now just getting the locker rooms – you almost have to keep up with the rest of the college hockey teams around the nation. This is such a great arena, I’m glad it’s staying here in Munn and we’re not building a new arena because this is a special place for sure.”