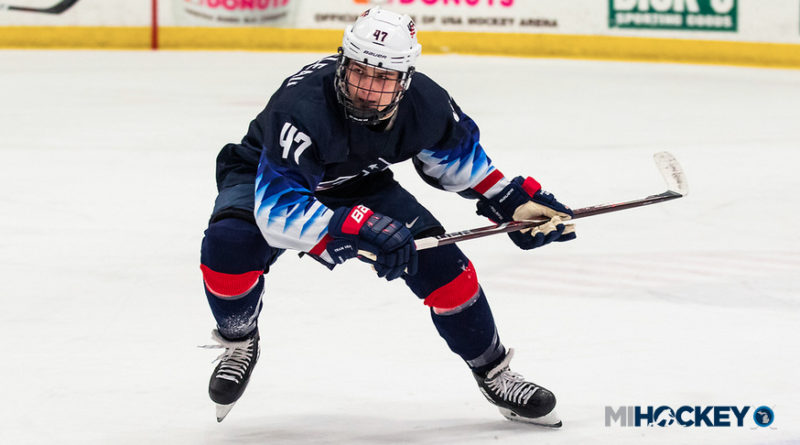 Being the son of a former professional hockey player meant lots of traveling for Thomas Bordeleau.

While he was born in Houston, Texas, he spent his formative years in Switzerland and in Montreal, following the career of his father, Sebastian.

That meant that when Bordeleau was searching for a D1 college hockey program to pick for his own career, the USA Hockey’s National Team Development Program Under-18 Team forward didn’t have as much knowledge about the NCAA world as most of his peers.

After a lengthy process, however, it was the school closest to Plymouth that won him over. Bordeleau has made his commitment to the University of Michigan.

“You know, I lived in Montreal, so I’ve never really been into college like all the kids here, they grow up watching colleges play football or hockey or whatever, and I didn’t, so for me, everything was new,” Bordeleau told MiHockey. “The process was really long, and after speaking with their incredible staff and just seeing their campus and getting the feeling of the school made me fall in love with the school. I really liked what I saw, and it made me want to go there.”

His father played parts of seven seasons in the NHL with the Montreal Canadiens, Nashville Predators, Arizona Coyotes and Minnesota Wild. He spent 10 seasons playing professionally in Switzerland, as well.

The younger Bordeleau said his U18 teammates are anxious to get the 2019-2020 season started; the NTDP opens the season with home games against Northern Michigan and Notre Dame on Oct. 5-6 (ticket info here).

“So excited; me and all the guys are pumped, we’re just looking forward to our first games,” Bordeleau said. “We’ve been working so hard through these days, we’re pretty anxious to see what’s going to happen on the ice with all the work we’ve done.”

Bordeleau, who played for Esther-Blondin in Quebec midget AAA hockey before joining the NTDP, said he’s looking forward to playing for Mel Pearson in 2020-2021.

“He’s a great human being, especially a great coach. For me, I think it was an easy choice. There are a lot of good coaches out there, and a lot of them have been awesome to me, and I’m very grateful for everything they did for me, but I guess it was just the full package with Mel there and the whole school. It’s incredible, it made the choice easy.”

“Yeah, it’s awesome,” Bordeleau said of having a fellow teammate pledged to the Maize and Blue. “We’re already talking about it and we’re pretty happy about it.”

And he said he has certainly been enjoying his time in Metro Detroit.

“I love it. It’s a great place to be. I’ve traveled a lot in my life, and I’m definitely; I lived for 10 years in Switzerland and then six in Montreal, and Plymouth will always have a special place in my heart. Everyone here has been great to me, and the city is awesome, and I only have positive things to say.”