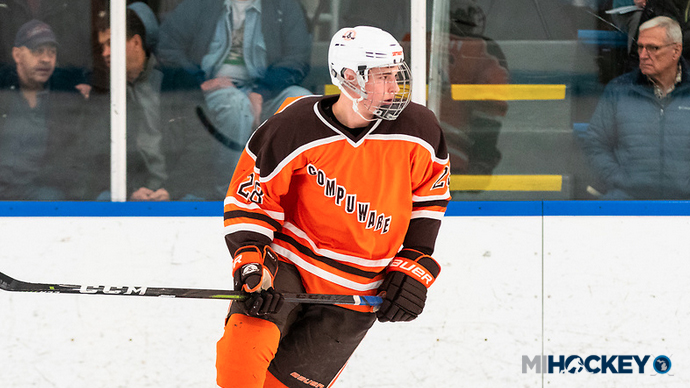 Braidan Simmons-Fischer’s hockey travels have taken him across the globe, but he has made the decision to stay home in the Mitten State for college hockey.

The Northville native has announced his commitment to Western Michigan.

“I chose WMU because they believed in my ability as a hockey player,” Simmons-Fischer told MiHockey. “The coaching and dedication to the program at WMU is unlike many others. Players are treated very well with a pro schedule from practices in the morning to lunch and breakfast with the team. Every year, they consistently help players reach their goals on and off the ice.

“I felt WMU will give me the best opportunity to become the hockey player I want to be.”

Last year, Braidan suited up for the Compuware 16U team that won an HPHL league title and finished as MAHA state runners-up. For the 2017-18 campaign, he played for EC Salzburg U18 in Austria; prior to that, he played for Belle Tire and Compuware in bantams.

The Green Bay Gamblers selected Simmons-Fischer in the fifth round of the USHL Draft this past spring; he expects to be suiting up for the USHL squad this fall.