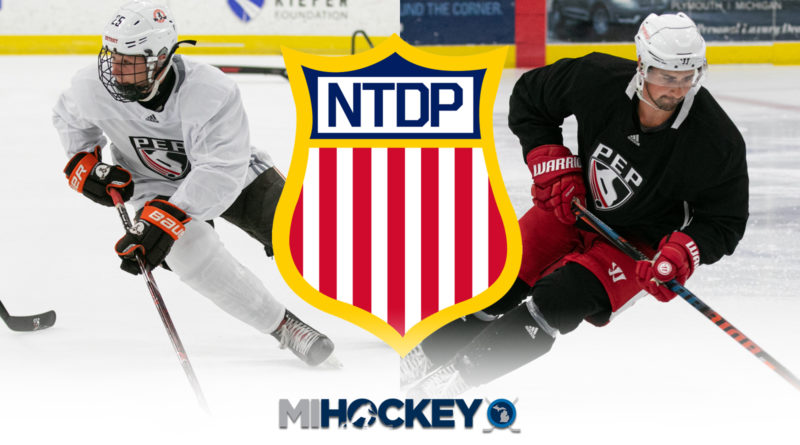 In one group, you had the likes of Dylan Larkin and Zach Werenski.

In another, you had members of this upcoming season’s Under-17 and Under-18 Teams.

And in a third, you had players hoping that they can be a part of this next year.

The USA Hockey National Team Development Program hosted a training camp at their home in Plymouth last week, run by Power Edge Pro. What started as a conversation between Larkin and NTDP assistant director of player personnel turned into the NTDP’s past, present and future all converging on USA Hockey Arena for three days of training in preparation for the upcoming season.

“Three years ago, when USA Hockey bought the arena, it’s obviously the home of the NTDP, but they wanted it to be a little open door and the headquarters for American players, and we’ve always talked about doing some type of camp since I’ve been here,” Braceful said. “Actually, it ended up being a little bit of networking, we had a lunch with Larkin, talked about having a pro camp, and then we said, you know what, we can get some of our incoming guys and our returnees who are here locally, get them in a group and we made a prospective group, too.

“We want to show them the building, give the players resources – we’re here in a hockey hotbed, and it’s one of those things where it’s a good thing for the guys to gear up here in August and get ready.”

The junior group featured four players for this year’s NTDP Under-18 Team and ten players from this year’s incoming Under-17 Team, as well as NTDP alum Graham Slaggert. Jacob Truscott represented Michigan in the 18 group; Dylan Duke, Red Savage, Ty Gallagher and Roman Schmidt were there with the 17s. The ‘top prospects’ group featured ’04 birth-year players from across the country, including Michigan’s own Tyler Duke, Cutter Gauthier, Rutger McGroarty and Hunter Brzustewicz.

“It was a great time,” said Dylan Duke, a Compuware alum and University of Michigan verbal commit. “PEP did a great job and really challenged our skills and to see the older NTDP guys and some of the pro guys, it was a lot of fun for us.

“You see all of the success the alums have had after the NTDP and they tell you how much fun it is and it’s a lot of work but the hard work will pay off. It’s really exciting.”

A total of 48 players took part in the three-day training experience in Plymouth.

“This was a learning experience for us with the younger groups, they get to come in and learn from the older guys who’ve already gone through it or in the process of going through it,” Braceful said. “When PEP and I originally spoke that was some of the reasoning behind it.

“I think it’s great because they realize the pros are doing the same drills. The pros may do it a little quicker and more efficient, but it’s good because they realize what it means to have good fundamentals and dial it in. I think it’s good to have seven ex-NTDP players who are all NHL players here, it’s good for them to see just how far those guys have come. It’s good for American hockey. Those guys who are returners and incoming guys, that’s who they are striving to be, and now they can see that, hey, a few years from now that could be me if I do the right things. For the prospective guys, it’s more so just understanding that you think it’s really far away, but it’s really not. It goes by fast. You’re 14, 15 now, and six years goes quick.”

PEP training was incorporated into the NTDP on-ice curriculum last fall, as well.

“They do a pretty good job, we’ve worked with them a little bit during the year, they came in and presented to our 18 and 17 team, we had a bit of a partnership with them, Joe and Nick Quinn, it’s a good resource for us,” Braceful said. “We practice more than we play, so we try to build a practice plan at the beginning of the year, and we like to mix things up, whether it’s skating or skills, so it’s a really good resource for us. I think they do a good job. For us, it’s giving our players everything at their fingertips, so they can be the best player they can be, and that was the basis of this camp.”