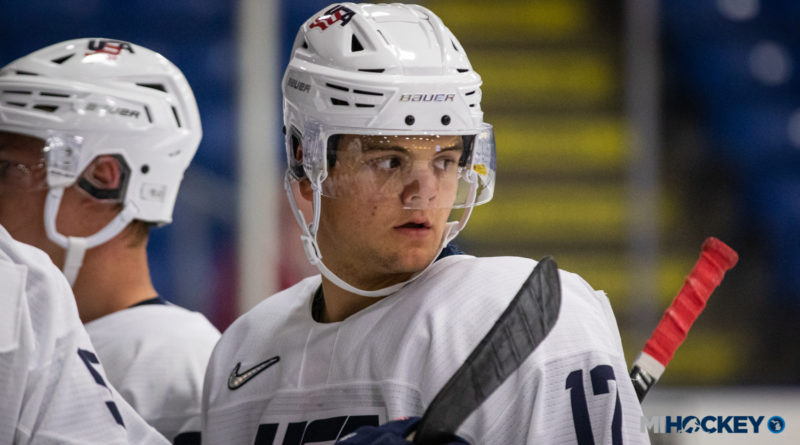 PLYMOUTH – Like 22 of his peers, the 2019 World Junior Summer Showcase is a return to old stomping grounds for Johnny Gruden.

The Rochester native is back at USA Hockey Arena after the 2018-19 season took him to Oxford, Ohio after two years with USA Hockey’s National Team Development Program.

Gruden, 19, played one season with the Miami RedHawks before opting to sign with Ottawa this spring; he was a fourth-round pick by the Senators in 2018.

That has meant a summer split between Metro Detroit and Canada’s capital city, but for the last week, Gruden has been living at USA Hockey Arena, his former home with the NTDP, for the first part of the evaluation process for Team USA’s upcoming World Junior roster selection.

“Yeah it’s such an honor to be putting on that jersey again, it feels awesome,” Gruden said. “Just seeing some familiar faces from playing with guys here and being back at USA Hockey Arena has been great so far.”

He acknowledges that it’s a little bit like a family reunion, too.

“It’s been good seeing all the guys you played here in the program with, but at the same time, you have your fun but you’re also here to work and make the team, so you have to balance those two things out.”

His goal for the WJSS, like all the rest, is to impress coach Scott Sandelin and his staff.

Gruden has suited up for Team USA in four games at the 2019 WJSS so far; he will play against Friday afternoon against Finland. Through his first three games, Gruden had three points and a +3 rating; in Thursday’s game, he was the extra forward in USA’s line-up and played sparingly.

Playing in the friendly confines of USAH Arena hasn’t hurt.

“It’s good, seeing the familiar faces, it’s nice, being at this camp, it kind of gets the nerves and the jitters out early. It’s been great so far.”

“It was a lot of fun,” Gruden said. “The coaches, the classmates, the teammates, everyone was great to me. My time there was awesome. Playing against the older guys in college was really beneficial for me, I just can’t thank them enough.”

Now, he will be fighting for a spot on the Senators’ NHL or AHL line-up at training camp; if his NHL team decides he needs another season at a lower level, he will play for the London Knights of the OHL. How’s it feel to officially be a professional hockey player, you ask?

“Haha, it’s good. Long ways to go, but it’s been good. It was an honor for me to be able to sign with Ottawa, and we’ll see what happens next year.”

He has a great resource at home as he makes the transition from college to the pros, too. His father, John, is a former pro hockey player currently working as an assistant coach with the New York Islanders.

“It’s a job now,” the younger Gruden said of his father’s advice. “Playing as a kid, it’s for fun and stuff, and you’ll still have fun but now it’s your livelihood. Treat your body right on and off the ice, so he was just giving me lots of tips.”

The longtime Honeybaked forward said he has been happy with how things have progressed with Ottawa, the team that drafted him in 2018.

“It’s been great. I was there for development camp for the last two years, and all of the coaching staff, the trainers, everyone’s been great. Seeing familiar faces there, like Josh Norris and stuff like that, it’s been good so far.”

“All those USA guys, it’s nice to see those guys. I train with Josh in the summer, play on the same Eastside Elite team, so it’s been good seeing him this summer and up in Ottawa. It’s been good.”

The Eastside Elite All-Star Challenge was one of Gruden’s final opportunities to get ready for the WJSS, as he was invited to participate in the charity event in Mt. Clemens on July 23.

“It’s awesome, what [Steve Oleksy] has done with the league. It’s grown so much over the last couple of years, and playing against those pro guys, it’s so cool, being up against guys like Larkin and Fowler and just being up against them at the draw, it’s pretty cool. I love that league.”