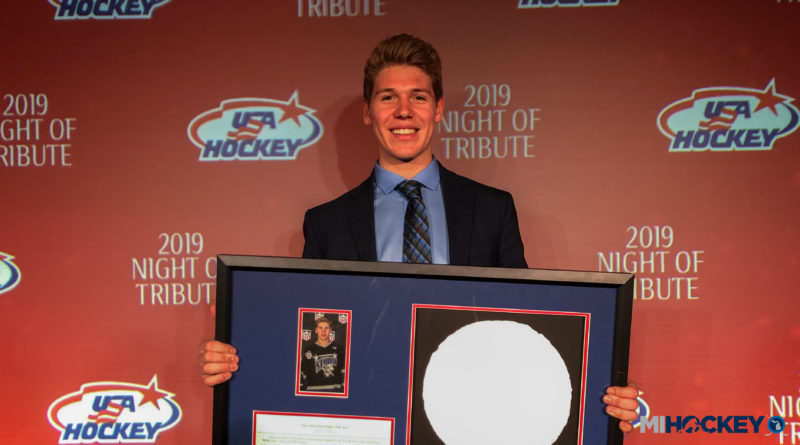 Ronnie Attard has one more thing to do before truly settling in at Western Michigan.

The White Lake native is hoping that this is the year he hears his name called at the NHL Draft.

The 1999 birth-year defenseman did everything he could do to make sure he was on the radar of league scouts, and saying he was successful would be an understatement.

Attard was honored as the USA Hockey Junior Player of the Year at the governing body’s Annual Congress, after he broke USHL scoring records from the blue line. The Honeybaked and Victory Honda alum broke league records for both goals and points in a single season in the USHL Tier 1 era, as he racked up 30 goals and 65 points.

He also played to a remarkable +47 rating on the season as captain and the defensive anchor of the Tri-City Storm. Because of all that, Attard was one of just 104 players invited to attend the NHL Scouting Combine.

“I knew coming into this season that it was my last draft-eligible season, so, it was something where I worked on my game all summer and I knew I had one last shot to really get recognized, and the hard work paid off,” Attard told MiHockey at the USAH Annual Congress.

“That season was something I’ll never forget. Obviously, we didn’t get to finish the way we wanted to, but the relationships and the friends that I’ve made and the coaching staff there is top-notch, and that’s one of the best seasons of hockey I’ve ever gotten to be a part of – not just on the ice, but the friendships I’ve made and all the people I’ve met.”

“It’s something that I wasn’t really expecting,” the future Broncos defenseman said. “I knew I had a good year, but just getting this honor is a huge thing. A lot of really good players have received this honor in the past, so it’s very special.”

Receiving the junior player of the year award meant giving a speech to a crowded banquet hall of top U.S. hockey leaders at the Awards Dinner; Attard said he wasn’t nervous until teammate Isaiah Saville gave an impressive speech for winning goaltender of the year.

“A little nerve-wracking at first. Coming into the night, I wasn’t nervous, I think I’m a pretty good people-person, but then Isaiah went up there and gave a good speech, and I started sweating a little bit, but I think it went well.”

Attard has had Saville with him for every major hockey event this season. The two won gold at the World Junior A Challenge, and they both attended the NHL Combine. Saville will be playing for Nebraska-Omaha next fall.

“It’s awesome,” Attard said. “He was my roommate at the combine last week, so I’ve seen a lot of him. I was saying goodbye to everyone at the end of the year, and I haven’t had to say goodbye to him yet. I’ll get to play against him next year too, so that will be awesome.”

Attard said he enjoyed his time at the Combine, despite the pressures of the physical testing and interviews with NHL clubs.

He will have his family with him at the NHL Draft in Vancouver, which starts tonight.

“The whole family’s coming out. it was supposed to just be me and my dad, and they all ended up getting plane tickets so I’m super excited to have everyone out there, it should be a special weekend.”

Whatever happens there, Attard hopes he can be an example for those youth hockey players who may be considered “late bloomers.” While most of the top players in his birth-year were selected two seasons ago, Attard took full advantage of his opportunity to shine in the USHL this year, and now it’s paying off.

“Yeah it just shows how, when you’re growing up you hear that everyone has their own path, and blah blah blah, but it just shows that you just need one good year of hockey to really get your name on the market and this year was the year for me.”