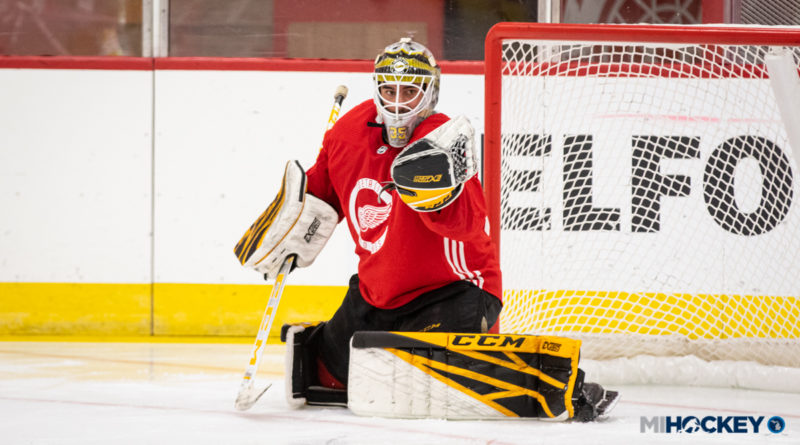 DETROIT – “Ozzie” or “The Dominator” – Robbie Beydoun couldn’t pick between the two.

“I pretty much liked them both equally,” he told MiHockey.

It makes sense. Beydoun grew up in Plymouth, less than a half an hour away from Joe Louis Arena, while Chris Osgood and Dominik Hasek were taking turns leading Beydoun’s favorite team to Stanley Cup championships.

This week, instead of acting like his idols in a driveaway or local rink, he’s doing so at Little Caesars Arena, as one of the few free-agent invitees at the Detroit Red Wings Development Camp.

Beydoun, a Compuware alum about to start his third season with Michigan Tech, said he got a call from Red Wings goaltending coach Jeff Salajko inviting him to this year’s camp.

“He knows I’m a local guy and he’s seen me play a couple times; he thought I could add some competition to the camp here,” Beydoun said.

He has earned his spot; last year, Beydoun recorded a 1.98 goals-against average and .931 save percentage in 12 outings with the Huskies. The invite was unexpected, however.

“It hit me kind of by surprise. I wasn’t really expecting it. Right when I got the call, I was super pumped, told my family and since I’m local, they’re all trying to come out and watch me, hopefully they can.”

His parents helped put things in perspective heading into camp.

“They were just telling me that they were happy to see my hard work paying off, it’s always been a goal of mine to get some recognition from NHL teams, so this is a pretty good stepping stone for me.”

As for what he’s trying to accomplish at the DRWDC, Beydoun wants to be a sponge.

“Just trying to soak everything in. Asking questions with the goalie coaches, they have a great staff, I just met some of the other guys aside from Jeff, and I just really want to pick their brains and ask them what I can clean up in my game to become a pro and try to take everything they give me into my own season.”

His own season will be with a Huskies team looking to bounce back from a WCHA first-round playoff exit last season after back-to-back league championships and NCAA Tournament appearances.

“Oh yeah, I’m pumped,” Beydoun said. “I think we’re going to have a good team this year. We have a lot of guys coming back, we’re pretty heavy with juniors and sophomores, we have a lot in those two classes and a lot of good talent – I’m looking forward to it.”