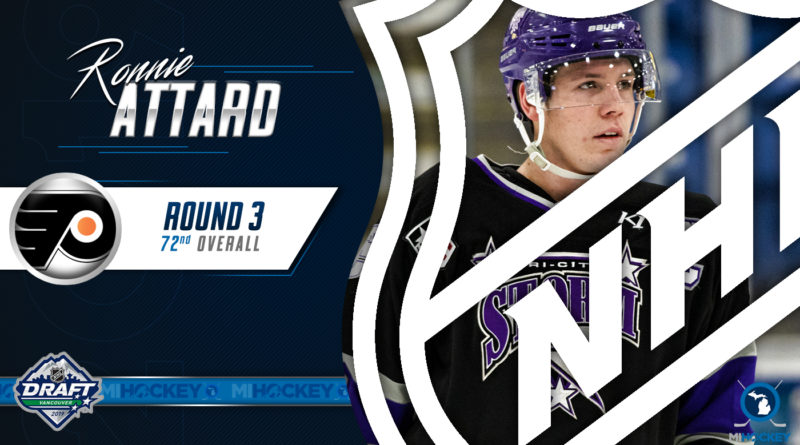 Ronnie Attard is on his way to Philly.

The White Lake native and Western Michigan commit has been selected by the Philadelphia Flyers in the 2019 NHL Draft.

After being ranked No. 143 among North American skaters in the NHL Central Scouting midterm rankings, Attard moved all the way to No. 76 on the final rankings – and then went even higher than expected in the draft on Saturday.

.@ronnieattard is 🔥🔥🔥🆙 to be the newest member of the #Flyers organization! #NHLDraft pic.twitter.com/qVBr3be80l

That all happened because Attard, the captain of his Tri-City Storm team of the USHL, recorded 30 goals and 64 points to break USHL modern-day records.

The 1999 birth-year defenseman talked to MiHockey at the USA Hockey Annual Congress shortly after accepting his award for junior player of the year, and discussed his incredible record-breaking season with the Tri-City Storm.

“I knew coming into this season that it was my last draft-eligible season, so, it was something where I worked on my game all summer and I knew I had one last shot to really get recognized, and the hard work paid off,” Attard said.

“That season was something I’ll never forget. Obviously, we didn’t get to finish the way we wanted to, but the relationships and the friends that I’ve made and the coaching staff there is top-notch, and that’s one of the best seasons of hockey I’ve ever gotten to be a part of – not just on the ice, but the friendships I’ve made and all the people I’ve met.”

The Honeybaked and Victory Honda alum got some high praise from EJ Hradek on the NHL Draft show: