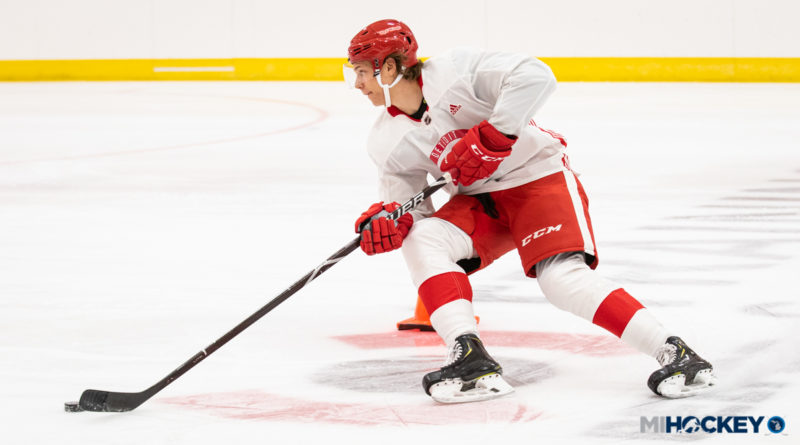 DETROIT – Moritz Seider took to the ice in Detroit for the first time Tuesday morning wearing red and white.

Just days after hearing his name called earlier than even he anticipated, the German-born defenseman got his first glimpse of life as a member of the Detroit Red Wings as the 2019 Red Wings Development Camp kicked off.

Along with his fellow participants, Seider went through two hours of on-ice testing and shooting, providing data and showcasing his abilities for Shawn Horcoff and the Red Wings’ player development staff.

“It was first time for ice time since a couple weeks now, so it was pretty fun to be on the ice again and a really good practice,” Seider said.

“It was nice to spend another day with my family and then come to Detroit. It was such a nice welcome here.”

Horcoff said, especially for guys who travel to the draft and haven’t skated recently, it can be tough to get into the swing of things right away.

“He’s a great kid,” Horcoff said. “Obviously he’s a big kid that can skate well… especially for a guy like that that hasn’t skated in a month, coming off the draft – the guys that end up going to the draft, it’s a tough little stretch for them, so he had a good day today.”

Seider said the reaction to being drafted – especially from those in Germany – has been exciting.

“Everybody was so happy for me, everybody in Germany was so hype, so excited, too, so it’s a nice response to being drafted.”

He even received a welcoming phone call from Dylan Larkin, too, and admitted he wasn’t quite sure what to say.

“I was so excited. I didn’t know what I have to say, so he can push me a little bit in the right direction, so it was really cool to see.”

The 6-foot-4, 207-pound Seider is used to competing against men, which should bode well for his growth and adjustment to the North American game. He played this past season in the DEL, Germany’s top league, where he posted six points in 29 games from the blue line. He also went on to add five points in 14 playoff games. The 18-year-old was ultimately named the league’s rookie of the year.

He said the biggest adjustment, as it is for many European-based players, will be playing on the smaller North American ice surface.

“Everything is a bit quicker, a bit faster on the small sheet than it is in Europe so it’s gonna be an adjustment I have to make, but I think sooner or later I’ll be ready for it,” Seider said.

Red Wings GM Steve Yzerman said at the draft that, while it wasn’t necessarily a no-brainer given the amount of available talent at No. 6, Seider was definitely the guy he wanted.

“He’s a very good prospect,” Yzerman said on NBC Sports Network. “We felt the top five kind of went somewhat as we expected, and this next group of players, including Moritz, they’re very good prospects. Ultimately, what we liked is he’s a big defenseman who can skate and has excellent hockey sense.”

Where Seider ends up next season remains to be seen, but there’s still a long summer ahead including the Prospect Tournament in Traverse City, as well as main training camp shortly thereafter.

“That’s a tough question, I can’t answer that right now,” Seider said on where he thinks he’ll play next year. “We have to sit down for a couple meetings, figure out what’s best for yourself and where you can play the most.”

Horcoff added that for Seider and all of their prospects, there’s no rushing them at this stage. Each player’s body of work throughout the summer and in training camp will help determine where they end up this season.

“Their play in September and October and training camp is gonna determine that… we’re just out here trying to give them every ounce of information that they can handle of what it takes to become a good pro. I played a long time in this league, so we’re here more for education than evaluation.”