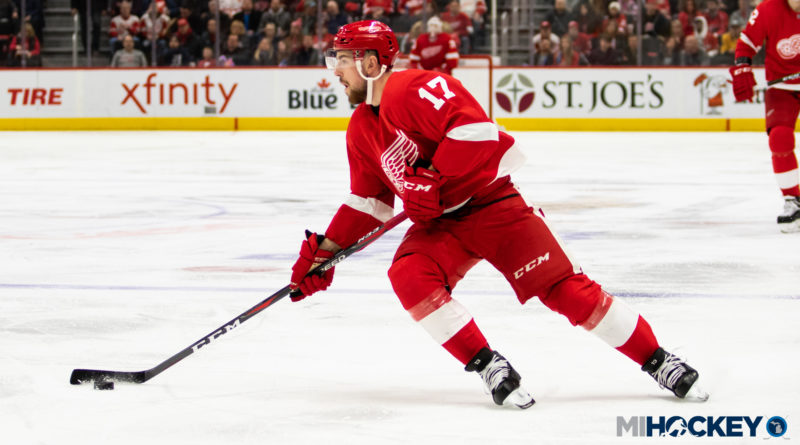 In a year that saw significantly more scoring across the National Hockey League, only 30 defensemen reached 40 or more points.

Nearly one per team.

Despite playing in just 46 games, Red Wings blueliner Filip Hronek’s 23 points put him on pace to reach that mark with Detroit – this in his first taste of the NHL.

Hronek approached a point-per-game scoring pace in the AHL this season, with an even plus-minus rating, following an impressive full 2017-18 campaign. So spending time at the game’s highest level was the best way for Hronek to discover weak points in his game.

For the most part, he played top-four minutes, including power-play time, in each and every stretch with the team this season. In fact, he averaged 19:57 per game, including 1:41 on the man advantage and 1:10 on the penalty kill.

But especially when Nick Jensen was moved to Washington near the trade deadline, it opened up more ice time. Hronek learned how to adapt to the NHL game, and he also left a positive impression on the coaching staff in the process.

“He’s proving himself and looks for sure [to be] a top-four defenseman in this league, and that’s great for our organization.”

Not only the coaching staff, but new GM Steve Yzerman, too, as he named Hronek among a group of core players–the group included Dylan Larkin, Anthony Mantha, Tyler Bertuzzi and Andreas Athanasiou–that has him excited for the future during his introductory press conference on April 19.

Blashill said he sees similarities in Calgary Flames defenseman Mark Giordano and hopes Hronek can become equally as effective. Giordano has posted 74 points in 78 games this season, along with a career-high plus-39 rating, while playing over 24 minutes each night on average.

This is a good time to say that I believe analytics do provide valuable insights beyond basic stat lines and even the ‘eye test,’ but should be viewed as pieces of the overall picture (no different than point totals and plus-minus) rather than the be-all, end-all measure, as many advanced stats are imperfect by nature. (Natural Stat Trick offers a glossary of terms and how some of these metrics are measured if unfamiliar.)

Giordano finished the season second in Corsi among 1,000-minute defensemen at 5-on-5 and ranked in the top-10 of several analytical categories that further illustrate his ability to create plays without sacrificing defense. In his own right, Hronek even fared well analytically among Wings defenders at 5-on-5 (with more than 700 minutes TOI), ranking second in Corsi percentage and High-Danger Scoring Chances Against per 60 minutes (HDCA/60) only to the departed Jensen–meaning he allowed the second fewest HDCA of all Wings blue liners.

“[Giordano] is a Norris Trophy candidate, probably should be this year,” Blashill said. “He’s a great comparable for me: not super fast, not super big; smart, can add offense 5-on-5 and on the power play; hard to play against. That, to me, is a real comparable for Filip Hronek. I want him to become Mark Giordano.”

Giordano, who was indeed named a Norris Trophy finalist weeks after Blashill offered the above thought, didn’t truly hit his stride until his 30s. The Red Wings hope Hronek can develop a bit quicker than that, but being a young defenseman in the NHL is a huge ask of anyone regardless of talent.

Out of the 325 defensemen that suited up in the National Hockey League this year, 128 of them (61 percent) are age 25 or older. And just 13 percent are age 21 or younger, still a generous percentage considering a fair number of those were call-ups that dressed for less than ten games.

“It’s a hard league to be a young defenseman,” Blashill said. “It takes longer for defensemen to become an elite-type player than it does for a young forward, it’s just a fact. Go look around the league.”

Unfortunately, there are a number of good examples to back up Blashill’s statement.

Florida’s Aaron Ekblad, now 23, entered the league at 18 and won the Calder Trophy in 2014-15 with 12 goals and 39 points and a plus-12 rating. He seemed poised to become one of the league’s top defenders rather quickly. But just two years later, he dropped to 21 points (albeit an injury-shortened season of 68 games) and also posted a minus-23 rating. Since that forgettable 2016-17 campaign, Ekblad has approached the 40-point mark twice, but has yet to surpass his rookie season total. Defensively this season, he wasn’t near the top of any advanced analytical categories, either.

And it’s not just Ekblad, but names around the league like Shayne Gostisbehere, Ivan Provorov, Mikhail Sergachev and Rasmus Ristolainen have all experienced some dramatic ups and downs early in their respective careers.

Even Ottawa’s Thomas Chabot, who has put up remarkable offensive numbers as a 22-year-old (55 points in 70 games), is still learning to consistently defend at the other end of the ice, given he’s also on a sub-par Ottawa team. Among the 123 defensemen who skated at least 1,000 minutes this season at 5-on-5, Chabot ranked 101st in shot differential, 77th in Scoring Chances For percentage, 102nd in High Danger Goals For percentage and 91st in Corsi-For percentage.

And let’s be clear: none of that is a knock on Ekblad, Chabot or any of the other aforementioned players whatsoever, but rather it reinforces what Holland and Blashill have said about life as a young defenseman in the NHL; It’s incredibly difficult to be that consistent, well-rounded blue liner year-in and year-out. They need time to learn and develop.

As Blashill said of the next steps Hronek can take, and really it’s the simplistic goal of all defensemen: “Keep creating without giving as much up.”

Prior to handing the reigns over to Yzerman, Ken Holland said during exit interviews that it’s about patience, time and insulation within the lineup.

“I can’t ask 21-year-olds to be 31 years of age, so what do we do about the defense? We draft, we develop, we have patience, we live with their mistakes, we hold them accountable, we educate them, we try to have some veteran players here that we think are role models for them and are steady influences on the ice and off the ice,” Holland said. “We have lots of good young defense. I mean, I can give you the resume of each of those kids… they’ve got great resumes. You’ve got to turn those resumes into NHL players. They need time.”

It’s not often easy for an outside viewer to embrace such words when individual development can take upward of six or seven seasons from a player’s draft year. They’re the same words that Yzerman preached in his opening press conference.

But the key, more-immediate third word, one that seems a bit easier to accept and bodes well for Hronek: opportunity.

“We provide opportunity,” Holland said. “Lots of our defense are 33-35 years of age and their contracts are either up or they have a year to go. This is a great opportunity for a young defenseman.”

In fact, Danny DeKeyser is the lone defenseman signed beyond the 2019-20 season, meaning jobs will almost certainly be up for grabs this next season, especially with Niklas Kronwall’s future uncertain.

It took time to settle in, as it always does for a young player, but Hronek said he grew increasingly comfortable as the season went on. That bodes well as the budding Czech blue liner continues on to a summer of training with invaluable NHL experience under his belt.

“With every game, I’m getting more comfortable,” Hronek said. “I feel comfortable on the ice, in the locker room. It’s easier than the start of the season.”

Larkin, who emerged as a leader in the Red Wings’ locker room this season with the departure of captain Henrik Zetterberg, also harped on opportunity and said it’s an important summer for the team. Especially following an impressive 8-3 record to end the season that offered a glimpse of what Hronek and the rest of Detroit’s budding youth core can do.

“It’s a huge summer for everyone,” Larkin said. “There’s opportunity in our organization for each guy to get better. In the summer you have to take care of yourself.”