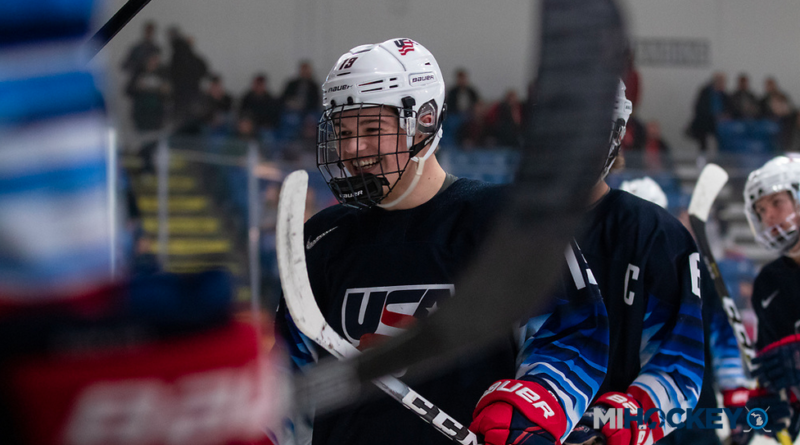 Only took Cole Caufield four games to break the American goal record at the IIHF Under-18 Men’s World Championship.

With his 10th goal of the tournament Tuesday, he passed Phil Kessel for the most by a single U.S. player at the prestigious international tournament – and he did it before the team even reached an elimination round.

Team USA’s 7-1 rout of Latvia wrapped up a 4-0 record in preliminary-round play. They will now move on to Thursday’s quarterfinals, which will be televised on NHL Network.

It is not yet known which team the Red, White and Blue will be playing.

Caufield ended up scoring twice in the contest; each goal he records adds to his record total as a member of USA Hockey’s National Team Development Program.

Michigan commits fared well in the contest, as John Beecher scored twice and Cam York also found the back of the net.

Bobby Brink, a new addition to the team at the U18s, scored a late goal in his debut. A Sioux City Musketeers forward and Denver commit, Brink played 16 games with the NTDP in the 2017-18 as a call-up.

Matthew Boldy also added a late goal for Team USA in the win.

Take a look at the @JohnWbeecher goal that got the U.S. on the board!#U18Worlds pic.twitter.com/W8Ten49VVh