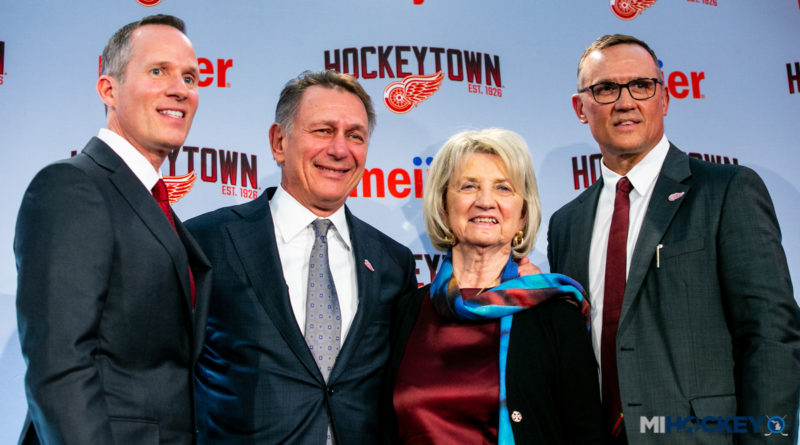 It was a Good Friday, indeed, in Detroit.

Steve Yzerman has come back home.

The Detroit Red Wings have officially announced that Yzerman will take over the franchise as the Executive Vice President next general manager.

The news was just made official at a press conference held inside Little Caesars Arena with Yzerman, Christopher Ilitch and Ken Holland.

“I would like to thank Chris, Mrs. Ilitch, the entire Ilitch family, the city of Detroit supporting me since being drafted coming here as an 18-year old, they’ve supported my playing career, supported me both professionally and even more importantly, the support and care they’ve shown for my wife and children, as well,” Yzerman said. “I’m extremely grateful for that. I’m thrilled to be back as the general manager. I’m grateful for the confidence Chris and Mrs. Ilitch are showing in me and putting me what I consider an extremely important position.”

“It’s an extremely exciting day in the history of our franchise,” Ilitch said. “With a leader like Steve in charge of our hockey operations and the valued support of an accomplished executive in Ken, we feel that we’ve taken a strong management team and made it even stronger today. This is truly an amazing day for our organization, the city of Detroit, the state of Michigan and for Red Wings fans around the globe.”

Holland, meanwhile, will remain within the organization as Senior Vice President. He became the winningest manager in franchise history this past season, passing Jack Adams. In fact, Sportsnet’s John Shannon reported that Holland was the architect of Yzerman’s return to Detroit.

“It has been a privilege and an honor to be the general manger of the Detroit Red Wings,” Holland said. “It’s been a roller coaster ride at times, three Stanley Cup championships as general manager, something I’ll treasure forever. It’s time to look forward.

“It’s a real exciting day for me to see Steve Yzerman come back where he belongs, back in Detroit with the Detroit Red Wings.”

Ilitch had nothing but praise and thanks for what Holland did over the last two decades with the franchise.

“His career accomplishments are truly astounding, and we’re thrilled Ken will remain with the organization in his new role as Senior Vice President,” Ilitch said.

The 53-year-old Yzerman is affectionately known as “The Captain” after leading the Red Wings’ dynasty in the 1990s and 2000s. He helped lead Detroit to back-to-back Stanley Cup championships in 1997 and 1998, before adding one more in 2002 before moving on to a managerial career.

Yzerman had been serving as general manager of the Tampa Bay Lightning since 2010, as he built the team into the perennial powerhouse it is today. He was named the NHL’s GM of the Year in 2015. He stepped down from the position at the start of this past season, citing the desire to spend more time with his family as a main reason. Yzerman was also executive director of Team Canada’s 2010 and 2014 Men’s Olympic teams.

“We know his competitive fire will permeate throughout our organization,” Ilitch said.