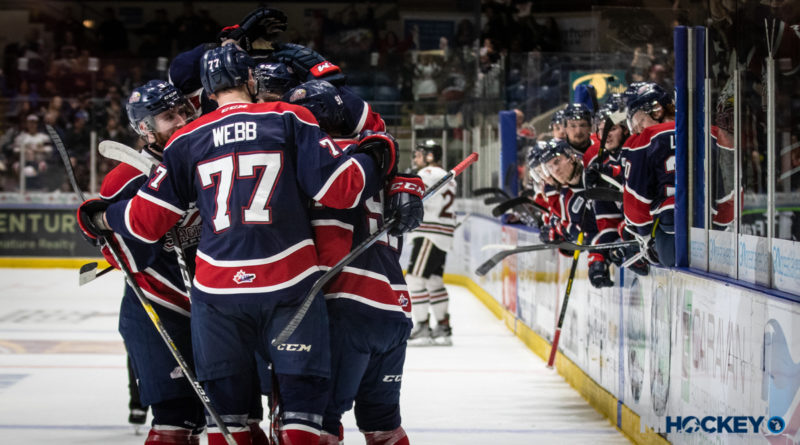 UPDATE (2:00 p.m. ET, Monday): The Ontario Hockey League has announced two suspensions for the Spirit moving forward in the Western Conference Finals and possibly beyond.

Goaltender Ivan Prosvetov has been suspended five games, effective immediately, for “batting a puck into the spectator area at a stoppage of play.”

Forward Justin Murray has been suspended four games, effective immediately, for “checking to the head.”

Video of the Prosvetov incident:

SAG vs GUE is going to OT, but Ivan Prosvetov will not be taking part because of this meltdown. He loses it on the refs after a goal against and then baseball swings the puck out of play after a whistle, which is 5 game suspension in the #OHL. Rookie Tristan Lennox will be in net pic.twitter.com/5vIwmSGUfv

Saturday night in Saginaw, Ryan McLeod was the hero.

The Edmonton Oilers second-round pick scored at the 6:52 mark of overtime to give the Saginaw Spirit a Game 2 victory over the Guelph Storm in the OHL’s Western Conference Finals.

With the victory, the Spirit hold a 2-0 series lead as the two teams travel to Guelph for a Monday evening Game 3 battle.

Birmingham native Bode Wilde scored with 1:17 remaining in regulation to force overtime for the Spirit, adding to regulation goals from Damien Giroux and Cole Perfetti.

Ivan Prosvetov recorded a 31-save outing to record his ninth win over the playoffs. He now holds a 2.38 goals-against average and .930 save percentage over 12 games for the Spirit.

Saginaw had taken control of the series with a Game 1 win on Thursday – click here for MiHockey’s photos from the game.

And the game-winner from McLeod: