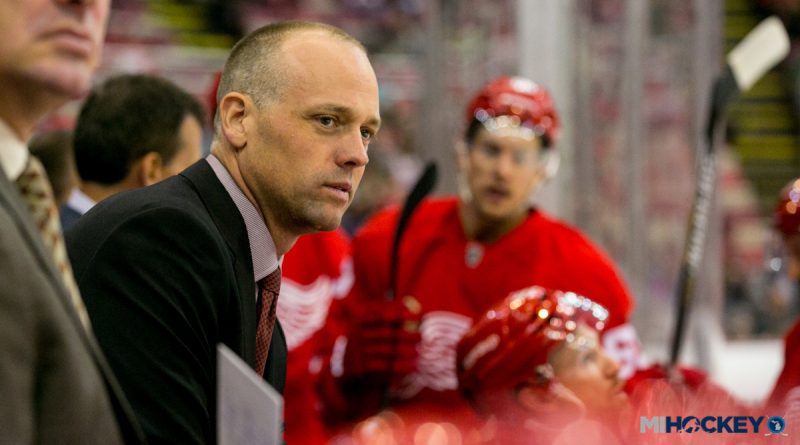 The first Michigan native to serve as head coach of the Detroit Red Wings has just signed a contract extension.

The Detroit Red Wings announced today that the team has agreed to a two-year extension with Jeff Blashill.

Blashill, 45, is in the midst of his fourth season as bench boss of the Wings, and seventh overall with the organization.

“Jeff has done a tremendous job developing our young talent as we continue to rebuild our organization,” said Red Wings executive vice president and general manager Ken Holland in the team’s press release. “Our young players have made significant strides during his time as head coach and are playing important minutes in key situations. As we continue to build towards the future, we have the utmost confidence that Jeff is the coach best suited to help our prospects become impactful NHL players. He has gained valuable experience as an NHL coach in each of his four years in Detroit and has instilled a work ethic in our current team that makes us hard to play against every night and competitive in every game, which is the identity we want our team to have as we move forward.”

Blashill holds a 135-143-47 record at the NHL level; he ranks sixth in franchise history with 325 games coached.

He was named the 27th head coach in franchise history on June 9, 2015 – tasked with following a decade run from Mike Babcock. Blashill is currently the seventh-longest tenured head coach in the NHL.

Blashill has been at the helm through the majority of the Red Wings’ ‘rebuild’ and this year, Detroit has seen career years from Dylan Larkin, Andreas Athanasiou and Tyler Bertuzzi while having nine rookies make their NHL debuts throughout the course of 2018-19.

A Detroit native who grew up in Sault Ste. Marie, Blashill is a Ferris State alum who coached at Western Michigan before becoming the head coach of the Grand Rapids Griffins in 2012.

From 2012-15, he led the Wings’ AHL affiliate, leading the Griffins to their first Calder Cup in franchise history.

The past two seasons, he has been selected by USA Hockey to serve as the head coach for Team USA at the IIHF World Championship.