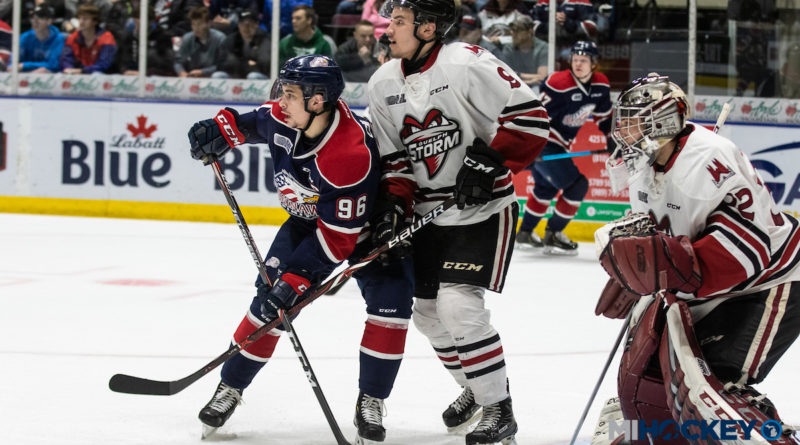 It was a heartbreaking end to an otherwise memorable, historic season for the Saginaw Spirit.

After reaching the OHL Western Conference Final for the first time in franchise history and having a 3-1 stranglehold on their series with the Guelph Storm, the Spirit fell in Game 7 Monday night at the Dow Event Center, a 3-2 final.

“For 17 years this franchise has been trying to find its way into a situation like this,” Spirit head coach Chris Lazary said following the game. “Our message to our guys, what they’ve accomplished here in this season and everything they’ve done has made this franchise relevant again. We’re ultra-proud in our ownership and our staff are so proud of these guys.

“There’s a lot of broken hearts in that room but we fought it to the very end in typical Saginaw fashion.”

Spirit captain Damien Giroux scored both Saginaw goals and backup netminder Tristan Lennox allowed two goals on 32 shots as he did his part to keep Saginaw in the series in the absence of suspended starter Ivan Prosvetov.

Giroux opened the scoring at 3:29 of the opening frame to put Saginaw on top first. Which seemed to bode well for Saginaw, as the Spirit entered Game 7 with a perfect 8-0 record when scoring first in the postseason.

But Cedric Ralph responded for Guelph at 13:10 to even things up through the first period, and Alexey Toropchenko struck early in the second stanza to give the Storm a 2-1 lead heading into the third.

The Storm outshot the Spirit 12-5 in the second period and 26-15 through the first two periods.

Despite a late push, Nick Suzuki made it 3-1 in favor of Guelph with an empty-net marker with 1:20 left in the game. Giroux responded just 16 seconds later to pull the Spirit to within one with 1:04 to play, but the squad ran out of time and fell 3-2.

The Storm climbed back against London in the previous series, down 3-0, and did so once again against Saginaw, improving to a perfect 7-0 in elimination games.